Target has proven to be good at taking a stand for things…that were never really a problem to begin with. Like one of those kids in primary school that starts a fight, because they aren’t getting enough attention. Well… Target has got the attention now from the entire nation. Now…they are about to regret making a fuss…[1] 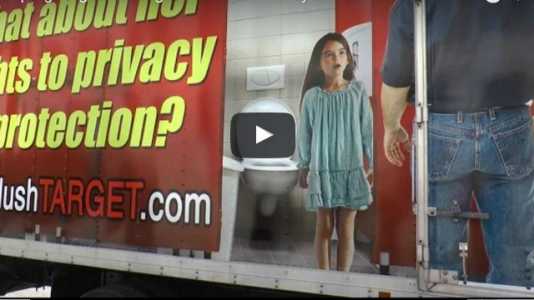 Retail giant Target has been the subject of controversy over the past several weeks since the company opened their bathrooms to members of the opposite sex, sparking “buycotts” and boycotts across the nation in protest.

Now, a new campaign, orchestrated by Life Site News and the Child Protection League, has taken to the streets of Minnesota seeking to #FlushTarget because they believe the company is endangering women and girls by exposing them to sexual predators.

“They are opening bathrooms to all men, whether transgender or non-transgender,” said Julie Quist of the Child Protection League.

When you cannot see the wrong in a man heading into the same bathroom as a little girl, there is a huge problem. Too many moral compasses have been corrupted in this present day…and here we find ourselves dealing with ridiculous drama like this… things that should NEVER have been questioned, are being destroyed. It is SO ridiculous, that I cannot help but wonder…if it’s just a smokescreen to keep our focus off what’s REALLY going on behind closed doors of the White House.