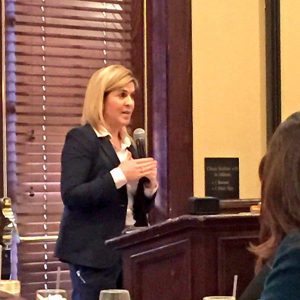 The Secret Service has come under intense scrutiny ever since a couple of party crashers were able to get into an Obama state dinner. Ever since then it’s been a embarrassing string of security lapses and bad conduct of agents that has badly damaged the prestige of the agency. But, this incident tales the cake and suggest the outfit is still in need of a complete overhaul.

Fox News[2] a Denver-based Secret Service agent who reportedly suggested that she would rather go to jail than take a bullet for President Trump has been placed on administrative leave.

The Washington Examiner reported[3] Friday that Kerry O’Grady, the special agent in charge of the Secret Service’s Denver district, was placed on paid leave during an investigation.

O’Grady reportedly posted on Facebook in October, “As a public servant for nearly 23 years, I struggle not to violate the Hatch Act,” O’Grady wrote. “So I keep quiet and skirt the median. To do otherwise can be a criminal offense for those in my position. Despite the fact that I am expected to take a bullet for both sides. But this world has changed and I have changed. And I would take jail time over a bullet or an endorsement for what I believe to be disaster to this country and the strong and amazing women and minorities who reside here. Hatch Act be damned. I am with Her.”