At Todd Beamer High School in Federal Way, Washington, teachers are cutting time out from real education to make room for their activist ideology. The students say that they were pressured by teachers to support Black Lives Matter and if they didn’t, they were ridiculed and harassed[1] by their black peers. 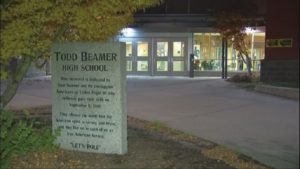 The big push for this type of behavior was triggered when a black female student got into a physical altercation with another student. The campus police officer attempted to perform his duties and moved in to restrain the girl. The girl responded by striking and kicking the police officer, all the while resisting arrest. After the arrest of the student, the school administrators requested that the officer involved in altercation be transferred to a different assignment. Shortly after, the teachers of the school began to push the Black Lives Matter agenda as a way to stand with the girl that was arrested for assault.

The Black Student Union was allowed to make a proclamation to the whole school over the intercom asking all students to wear black as a way to support the girl and Black Lives Matter. While the event was supposedly not approved by the school, they did allow the Black Student Union to use it. Also teachers were not supposed to take part in the event, but white students said that other students and teachers alike, pressured them to join in and any that refused, were called racist. 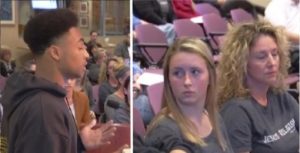 Elly Mae Haney is a student at the school and she shared what exactly happened for the duration of two class periods:

”Both of those periods, we sat there for four hours and talked about why black lives matter,” she said.

She and her mother decided that she would speak out when teachers and students started pressuring those who did not want to participate in supporting Black Lives Matter and this girl that fought a student, and assaulted a police officer, and was consequently arrested:

“She [the teacher] told us all to wear black tomorrow,” Haney said. Her Mom also added, “The teacher handed out stickers that said Black Lives Matter and encouraged all students on Friday to wear all black in support of that movement.”