You really have to hate someone to not only kill them, but to then chop up their body and keep it in plastic containers that you carry around with you for SEVEN YEARS! Loretta Doyle Burroughs is accused of doing just that, after her husband who had been missing for seven years was found dismembered and packed into plastic containers shoved in his wife’s closet.[1] 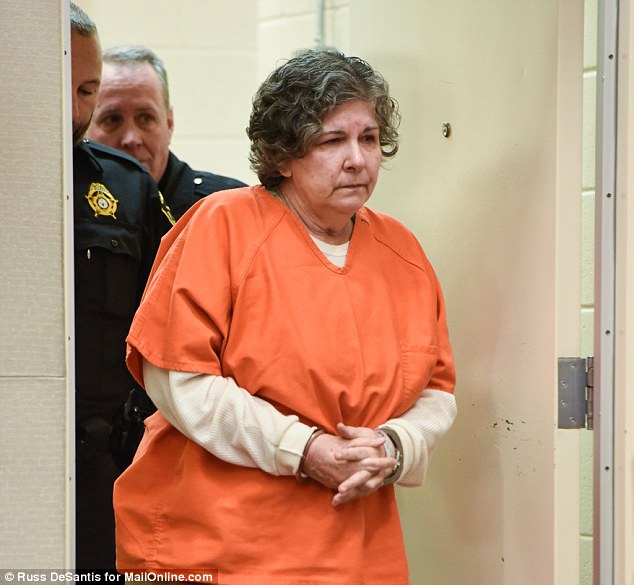 Loretta Doyle Burroughs being escorted into the court room. She is being held on $2M bail.

Almost seven years after he disappeared, Daniel Burroughs, 66, was found — dismembered and packed into plastic containers that were stashed in his wife’s closet.

Loretta Doyle Burroughs, 63, formerly of Ventnor, N.J., is charged with stabbing her husband to death and on Tuesday the round, gray-haired grandmother cried as she shuffled into an Atlantic County, N.J. courtroom  wearing an orange jumpsuit, handcuffs and leg irons.

She rejected any plea bargains and Criminal Presiding Judge Michael Donio ordered her to stand trial next March, when a forensic anthropologist.will testify, due to the condition of the victim’s remains.

That is exactly what causes nightmares for the victim’s grief-stricken half-brother, Raymond Wantorcik III, 56, of Glenolden, PA.

‘Twenty-four seven, my mind is wrapped around what happened to my brother,’ he tells MailOnline in an exclusive interview, struggling to contain his emotions.

Because of his turmoil, Ray has been unable to work for five years.

In fact, before Tuesday’s hearing began, Ray gave in to his pain and frustration. He handed a flyer with a Photoshopped image of Loretta, bloody and wielding a knife, to the accused’s sister.

The grisly image expressed the nightmares that he suffers every day.

This woman is obviously mentally ill, and has proven herself to be unfit to live among the average population. For her heinous crimes, she deserves nothing short of a life sentence.
Endnotes: