The KKK counter protested a black unity rally in South Carolina over the Confederate flag, and what happened next will shock you[1].  Actually, no it won’t… 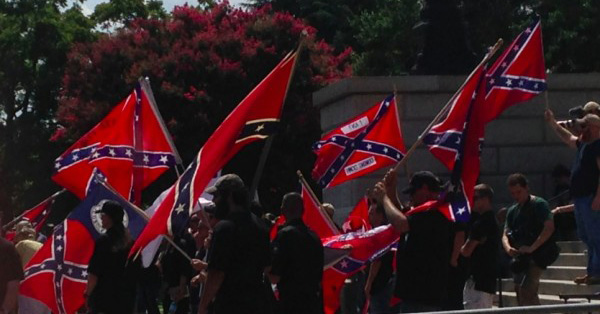 The KKK was there to protest the July 10 removal of the Confederate flag at the Statehouse, which occurred in the wake of a massacre at a black church in Charleston that claimed the lives of nine people in June.

About 50 members descended on the Capitol steps waving the rebel banners — at least one of which included a Nazi symbol — and immediately began shouting racial slurs at attendees of an earlier “Countering the Attack on Black Unity Rally.” Those protesters were moved behind barricades, a distance away from the Statehouse steps, where they yelled back at the pro-Confederate flag group.

The network added that the earlier rally included members of Black Lawyers for Justice and Black Educators for Justice, a Florida organization with links to the New Black Panther Party. About 200 had gathered as speakers at a podium shouted, “Black power!”

There were five arrests once the KKK arrived.  Charges ranged from disorderly conduct to assault.