Knocked off his feet! Dad falls over with joy as he’s reunited with soldier son in surprise hockey game homecoming

There are few things more emotional than when a serviceman or woman surprises a loved one that they are home from war.  You just may not want to surprise someone while they are standing on ice[1]… 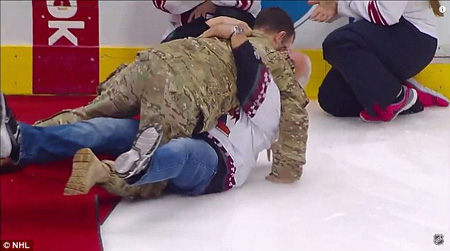 Parents of a U.S. Army Sergeant were left stunned with excitement after their son, who had just returned from being stationed in Afghanistan, decided to surprise them on ice before a hockey game.

Sergeant Dan Urman’s father Eitan Urman was so happy that as he embraced his son and lifted him off the ground, he slipped on the ice, causing both to tumble over while still hugging.

As part of the planned surprise, Eitan and his wife Ronit, of Scottsdale, Arizona, had been invited to drop the puck before the Arizona Coyotes game against the Anaheim Ducks on Saturday.

Welcome home Sergeant Dan Urman.  Thank you for your service to our country.