If you don’t believe in miracles, you will after you read this. Country band Lady Antebellum recently suffered a tragedy when their tour buss caught fire on the interstate near Dallas, TX. Everyone was evacuated and nobody was injured, but the bus was burnt to a crisp. The only thing that survived was the lead singer’s Bible.[1] 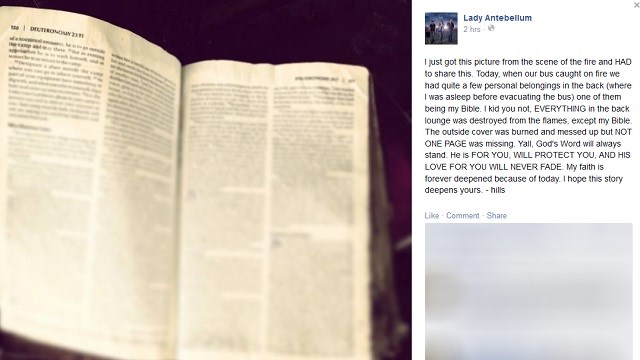 A tour bus for superstar country group Lady Antebellum has caught fire along an interstate near Dallas, though no one was injured.

Singer Hillary Scott posted on the group’s Facebook page that she, her husband, their tour manager and the driver were on the Dallas-bound bus when a tire caught fire Thursday.

Photos show the back of the bus badly burned. Scott says everyone evacuated, writing “EVERYONE IS SAFE AND SOUND.”

In a later post, they stated: “I just got this picture from the scene of the fire and HAD to share this. Today, when our bus caught on fire we had quite a few personal belongings in the back (where I was asleep before evacuating the bus) one of them being my Bible. I kid you not, EVERYTHING in the back lounge was destroyed from the flames, except my Bible. The outside cover was burned and messed up but NOT ONE PAGE was missing. Yall, God’s Word will always stand. He is FOR YOU, WILL PROTECT YOU, AND HIS LOVE FOR YOU WILL NEVER FADE. My faith is forever deepened because of today. I hope this story deepens yours. – hills”

Garland police say the driver stopped the bus after the tire blew on Interstate 30 east of Dallas, and the vehicle caught fire. Police confirm nobody was hurt.

Lady Antebellum is nominated for Vocal Group of the Year at Sundays 50th Annual Academy of Country Music Awards. The show is being held at AT&T Stadium in Arlington, near Dallas.

Even if you don’t believe in God, you have to admit that this is pretty amazing. Someone was definitely watching over them.