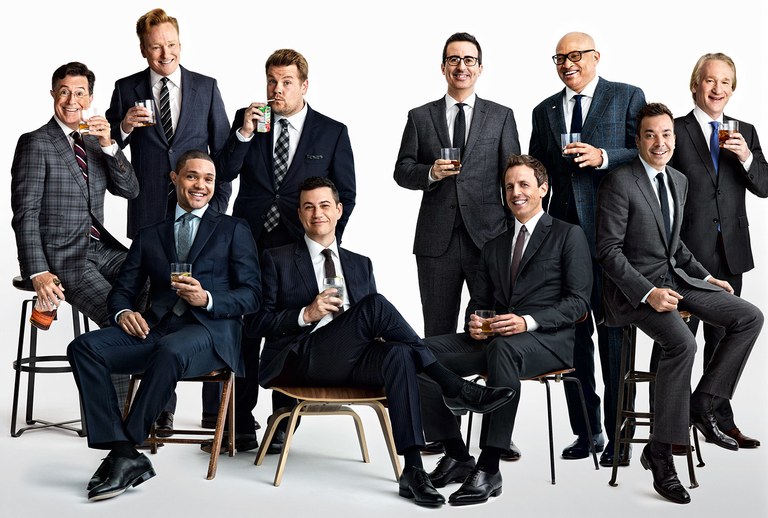 [1]Late night comedy shows are no longer funny. They’ve turned into crude, Trump-bashing political attacks. There is nothing funny about watching a solid hour of the left spewing out hate speech against everything the right believes in. It’s like watching Rachel Maddow — when you’re expecting to see Johnny Carson or Jay Leno. If you want to watch a left-wing political show, you’d watch Maddow, not comedy. There are no conservative major late night comedy hosts.

People tune in to comedy shows in order to escape the endless political infighting. They want humor, not biting partisanship. Conservatives especially don’t want to be subjected to nonstop attacks. Hate speech is defined[2] by the Merriam-Webster dictionary as “speech expressing hatred of a particular group of people.” Late night comedy has evolved into hatred toward conservatives.

Stephen Colbert is the most partisan of today’s big three late night comedians. He took over “The Late Show,” which was originally hosted by David Letterman from 1993 until 2015. Under Letterman, there was a semblance of balance between political jokes aimed at the right and the left, and much of the show wasn’t political. The replacement of Letterman with Colbert changed all of that. CBS gave him nearly full control over the show. With an annoying, smug demeanor, Colbert turned the show into incessant, savage attacks on the right. As a result, only 17 percent of his viewers identify as Republicans.

Colbert’s show isn’t just partisan but downright disgusting. In May, Colbert made[3] a crude sexual joke about Trump and Russian President Vladimir Putin, too indecent to reprint here. The remark was accused of being homophobic. The FCC investigated the incident but took no action against Colbert. In September, Colbert made[3] a Nazi salute when comparing the loyalty of former Trump advisor Steve Bannon to the president. This is offensive to Jews who suffered from the real Holocaust.

Colbert says things that are flat out false. During a September show, he claimed[4] that Trump “didn’t meet a single storm victim, see an inch of rain or get near a flooded street” while surveying Hurricane Harvey damage. In reality, plenty of Americans watched footage on TV of Trump meeting with victims in shelters and elsewhere. In fact, ironically, the left wrongly condemned Melania Trump for wearing heels while touring the damage (she actually changed into tennis shoes prior to touring).

Colbert is a hypocritical[5] liberal. He has a staff of 19 that write his material for him. Only two are women and 17 are white men. Yet he is one of the first comedians who will attack Trump for being sexist or racist.

What happened is “The Late Show” basically became the left-leaning, partisan “The Daily Show” reincarnated as late night comedy. Colbert got his start on the latter as a regular guest when it was hosted by Jon Stewart. Meanwhile, “The Daily Show” continues on with a new lefty host, Trevor Noah. “The Daily Show” is very clever; it is a left-wing political show masquerading as comedy. Under Noah, it has become even more vicious against the right than under Stewart.

“Jimmy Kimmel Live!” debuted on ABC in 2003, becoming a second major late night comedy show. After Trump took office, Kimmel’s attacks on conservatives increased. While talking about his son’s health condition during a show, Kimmel went on a rant[6] against opponents of Obamacare, cruelly implying that if they had their way, his son wouldn’t have been eligible for health insurance to cover his urgent heart operation.

A day after the Las Vegas massacre, Kimmel exploded in a rant[7] on his show promoting gun control. He called for gun confiscation and made a vulgar comment about the NRA that is too crude to reprint here. He said Republicans “should be praying for God to forgive them for letting the gun lobby run this country, because it’s so crazy.”

As a result, Vulture.com asked Kimmel if the days of apolitical late night comedians are over. Kimmel responded, “Maybe we’ll never go back. Maybe the days of fun are over” — brazenly admitting the comedic aspect of late night comedy (duh!) has been taken out. He criticized Trump, “Everything Donald Trump is doing and undoing is bad, bad, bad, bad, and it seems so obvious, and it’s happening anyway.”

Kimmel doesn’t care that he’s losing Republican viewers. During an interview with CBS last month, he said, “if they’re so turned off by my opinion on health care and gun violence then I don’t know, I probably wouldn’t want to have a conversation with them anyway. Not good riddance, but riddance.”

Jimmy Fallon, who replaced Jay Leno on “The Tonight Show,” has kept that show a little classier. When asked by NBC’s “Sunday Today” why he features less Trump bashing than the other two late night shows, he responded[8], “It’s just not what I do, I think it would be weird for me to start doing it now. …  A lot of [his] stuff is hard to make a joke about. It’s just too serious.”

There are other comedians with regular shows which run earlier in the day or on Netflix, and they are all about as partisan. Chelsea Handler has become so unapologetically aggressive[9] in her attacks against Trump that some believe it contributed to the demise of her Netflix comedy show and decision[10] to transfer into politics. With the exception of a handful of conservative comedians like Dennis Miller, the partisan bent has spread throughout the entire world of comedians. Turn on almost any stand-up comic today and you will be subject to a barrage of Trump bashing and attacks on conservative viewpoints.

Previous late night comedy hosts were never this partisan. Johnny Carson wisely told[11] Barbara Walters in 1984, “I think one of the dangers if you are a comedian, which basically I am, is that if you start to take yourself too seriously and start to comment on social issues, your sense of humor suffers somewhere.”

Today’s comedians are turning comedy into partisan talk shows. We don’t need anymore — especially on the left, where there is a glut of them due to the left-leaning slant of almost all news networks except Fox News. These new late night comedians aren’t funny, they’re downright rude. Considering a large proportion of the population that watches late night comedy is on the right, they are making a big mistake.