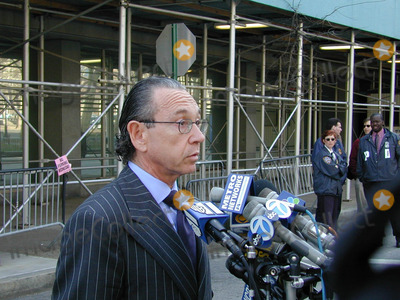 [1]Attorney Sanford Rubenstein, 70, is being accused of raping a 42-year old executive who has ties to Al Sharpton, in the hours following Sharpton’s 60th birthday party.  The victim was reportedly ‘incapable of consent,’ so may have been intoxicated or passed out. Guests at the party included Mayor de Blasio, Gov. Cuomo, director Spike Lee and singer Aretha Franklin.[2]

According to the Daily Mail Online, Rubenstein has been involved with several high-profile cases:

Recently he was chosen as the attorney for Sandra Amezquita, a heavily-pregnant woman who claims NYPD officers threw her to the ground belly-first during an arrest.

He is also representing the family of Eric Garner, who died after police officer held him down in what appeared to be a chokehold during an arrest on Staten Island in July.

According to a profile on the website of his law firm Rubenstein Rynecki: ‘The senior partner… is one of New York’s most sought-after advocates for victims’ rights in personal injury and civil rights matters

‘Appearing frequently on national and local TV News, he has been quoted in all of New York’s daily newpapers. Rubenstein has been a guest advocating victims rights on Good Morning America, Larry King Live, Geraldo at Large, Inside Edition and Montel.’

He represented police-torture victim Abner Louima in his civil suit against the city. The case was settled in July 2001 for a stunning $7.1 million, the largest police brutality payout in city history at the time.

If the accusations are true,  Rubenstein may have thought he could get away with his actions because he is a prominent leftist. Too many times, leftists get a free pass from the left-wing legal system – especially if they are well-connected attorneys or judges. Let’s hope justice is done in this case – and the alleged rape victim isn’t made out to be a “whore” as a defense tactic.
Endnotes: