This is why the NY Times do 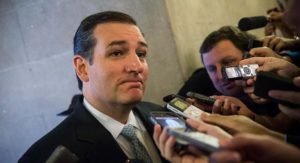 [1]esn’t have the respect of the vast majority of the American people. They strictly cater to the Looney Liberal pot smoking Anti-God Left that champions every kind of debauchery in the world. The more vile, they better they like it. This is who these pieces of filth at The Times are!

Politico[2] reports the New York Times informed HarperCollins this week that it will not include Ted Cruz’s new biography on its forthcoming bestsellers list, despite the fact that the book has sold more copies in its first week than all but two of the Times’ bestselling titles, the On Media blog has learned.

Cruz’s “A Time For Truth,” published on June 30, sold 11,854 copies in its first week, according to Nielsen Bookscan’s hardcover sale numbers. That’s more than 18 of the 20 titles that will appear on the bestseller list for the week ending July 4. Aziz Ansari’s “Modern Romance,” which is #2 on the list, sold fewer than 10,000 copies. Ann Coulter’s “Adios America,” at #11, sold just over half as many copies.

“A Time For Truth” has also sold more copies in a single week than Rand Paul’s “Taking a Stand,” which has been out for more than a month, and more than Marco Rubio’s

“American Dreams,” which has been out for six months. It is currently #4 oThis week, HarperCollins, the book’s publisher, sent a letter to The New York Times inquiring about Cruz’s omission from the list, sourcn the Wall Street Journal hardcover list, #4 on the Publisher’s Weekly hardcover list, #4 on the Bookscan hardcover list, and #1 on the Conservative Book Club list.es with knowledge of the situation said. The Times responded by telling HarperCollins that the book did not meet their criteria for inclusion.