The Left’s Factions Increasingly Turning Their Sights on Each Other 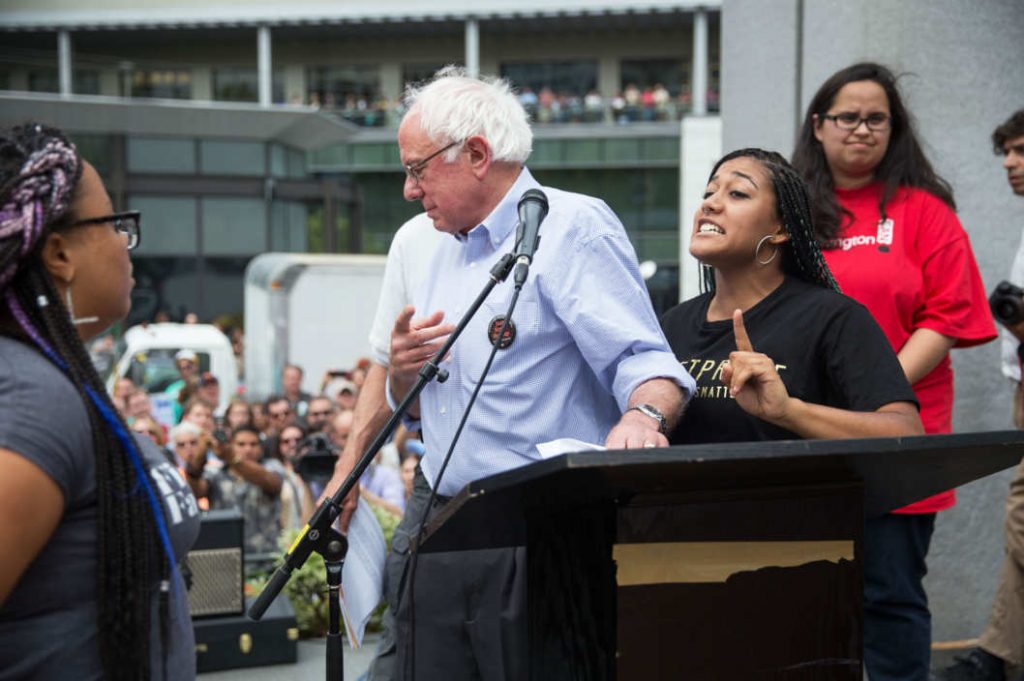 [1]As the left becomes[2] more intolerant, its various factions are encountering more conflict with each other. Black Lives Matter and other minorities create “spaces” where white people aren’t allowed — which exclude sympathetic white liberals. Transgenders and feminists get into vicious fights[3] over whether transwomen are really women. Radical immigration groups crash[4] LGBT marches. Feminists on college campuses broadly paint male co-eds as rapists — even liberal men. Comedians who routinely mock conservatives are finding themselves chased away[5] from college campuses by snowflakes who don’t like their LGBT and race jokes. Bernie Sanders’ supporters are investigating[6] the mysterious death of former DNC staffer Seth Rich, while Hillary Clinton supporters ridicule them as conspiracy theorists.

The left’s dominant factions are even more likely to run into conflicts with each other as a result of the left taking over much of society. Since conservatives are increasingly blocked out of areas like education, the left is free to run rampant. For example, there is no longer a debate over whether to teach children encouraging messages about being LGBT in school. Instead, the debate is whether to include transvestites, polygamists and more controversial aspects of gender and sexuality in the discussion.

White liberal professors are finding themselves under siege in upper academia. Michael Rectenwald, a professor at NYU, said[7] in February that he was leaving the left after becoming fed up with the snowflakes, trigger warnings, safe spaces and other hostile behavior he was subjected to. He explained on Facebook, “today’s ‘Left’ is rife with the most obscene, abusive, nasty, spiritually ugly and utterly unethical, hypocritical and fanatically horrible people I’ve ever encountered in my 58 years on earth.”

The media is also dominated by the left, and faces similar feuds. Talking heads and journalists berate each other for using phrases like “illegal immigrant” instead of “migrant.” Phrases like “illegal alien,” which some conservatives still use, were purged[8] earlier from mainstream publications.

Black Lives Matter pushes other left-wing factions out of the way in order to promote its agenda. In 2015, two of its activists interrupted[9] Democratic presidential candidate Bernie Sanders while he was giving a speech. Sanders gave up trying to resume the speech and left.

Attend a modern day meeting of progressives and observe how everyone walks on eggshells. Use the wrong term, such as an incorrect pronoun to describe someone, and you will feel the wrath of one faction. If you’re a white male and speak up, you risk being silenced with the statement, “Check your privilege.”

Much of this sensitivity during meetings originated during the Occupy Wall Street encampments a few years ago. White males were often told[10] to stop talking and cede the floor to minorities. The theme “step up, step back,” was adopted[11] at Occupy Wall Street’s General Assembly, “encouraging white men to acknowledge the privilege they have lived in their entire lives and to step back from continually speaking.”

One of the biggest left-wing conferences each year is the Left Forum. Some of the names[12] of the seminars presented reveal the current hostility between groups: “Rainbow Coalition Fascism,” “The New Thought Police — Social Justice Warriors” and “Even Bernie Wants to Bomb Syria: Challenges to Anti-Imperialist, Anti-War Organizing Today.”

As the infighting escalates, the left isn’t going to be able to hold all of its factions together. The Democratic Party is already feeling the fallout. Donald Trump won the presidential election in part due to feuding between the Bernie Sanders wing of the Democratic Party and the establishment wing. Sanders’ supporters became disillusioned by the Hillary Clinton campaign’s corruption and collusion with the Democrats, and failed to show up to vote for her in the general election. Unlike the Republican Party, there is no “religious right” wing of the Democratic Party that preaches turning the other cheek in order to get along. Most of the left’s factions take the opposite approach, calling for the hostile and violent confrontational tactics of Saul Alinsky. Infighting on the right pales in comparison to the nastiness of the feud[13] (warning: offensive content) between transgenders and “TERF” feminists.

Increasingly shut out of society, conservatives may be forced to watch much of this play out on the sidelines. And some of that may be OK. Change is already happening. Fed up with what they see on the left, and what has happened to the older, entitled, left-leaning Millennials, Generation Z is turning[14] to the right. They’ve grown up surrounded by “instant access to the world’s harsh realities on their smart phones” and “can only remember a news cycle ‘marred by economic stress, rising student debt … and war overseas.’” Consequently, they take a “‘more pragmatic’ and conservative outlook on the world.” Conservative author Eric Metaxas believes, “they may be, by certain measures, the most conservative generation since World War II.”

The left’s philosophy is predicated upon a “me first,” take-from-others philosophy based on ever-changing, arbitrary standards of what is considered the most worthy causes. These causes tend to be anything that undermines Christian values, since the left vehemently dislikes a moral code that gets under its skin for some reason. Even if that moral code is just a small part of an overarching set of principles they agree with. The left’s model is unsustainable. There is only so much hate and money from other people to go around. Eventually they will hate each other and run out of other people’s money.