Legendary Coach Mike Ditka Gives Kaepernick Some Advice: “Get The Hell Out!”

I honestly don’t know what happened to the NFL. It was once an organization that promoted the best of sportsmanship. People like Vince Lombardi, George Halas and Tom Landry all exuded a quiet dignity that permeated the sport. 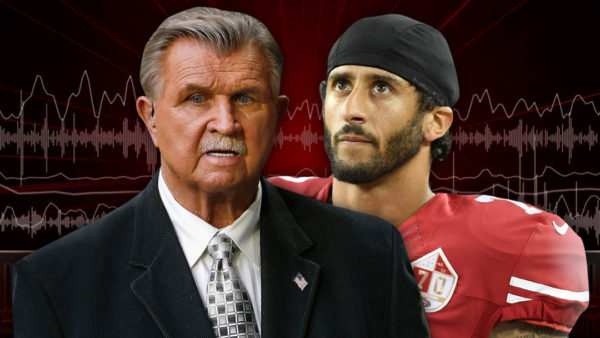 Today, we’re left with endless showboats, back-talk from multi-millionaire primadonnas and now displays of outright contempt for their country.

For some reason, the NFL as an organization has allowed these spoiled children to do whatever they want and the sport has greatly suffered as a result.

Still, those that remember the good ol’ days of gridiron grit aren’t having it.

Legendary coach Mike Ditka recently weighed in on the controversy surrounding several ingrates who refuse to stand for the national Anthem. Directing his comments to Colin Kaepernick, the beginner of this nauseating trend, Ditka had some strong words.[2]

When asked in a recent interview what he thought about Kaepernick, Ditka let loose:

“I think it’s a problem, anybody who disrespects this country and the flag. If they don’t like the country, they don’t like our flag, get the hell out. That’s what I think.

“So if you’re asking me, I have no respect for Colin Kaepernick. He probably has no respect for me, that’s his choice. My choice is that I like this country, I respect our flag. And I don’t see all the atrocities going on in this country that people say are going on.

“I see opportunities if people want to look for opportunity. Now, if they don’t want to look for them, then you can find problems with anything, but this is the land of opportunity because you can be anything you want to be if you work. Now, if you don’t work, that’s a different problem.”

Ditka has also blasted President Obama as the “worst president we’ve ever had” and voiced disapproval for the 2014 incident in which some Rams players put up a “hands up, don’t shoot” gesture in solidarity with Michael Brown, a thug who was killed after attacking a police officer.

This country as a whole needs to get a lot tougher and needs to reject this breed of radicalism that is tearing our country apart.

Our nation is not perfect, but I’m with Ditka; if America is so damn bad, feel free to play for the Canadian league.