Al Sharpton had a whole lot to say this morning, of course none of it made any sense whatsoever. According to the man, racism and social media are the reason Trump had a victory like he did yesterday in winning the election. Yes, being the race-baiting for hire agent that he is, he followed up with… ‘he isn’t going to blame anyone.[1]‘ 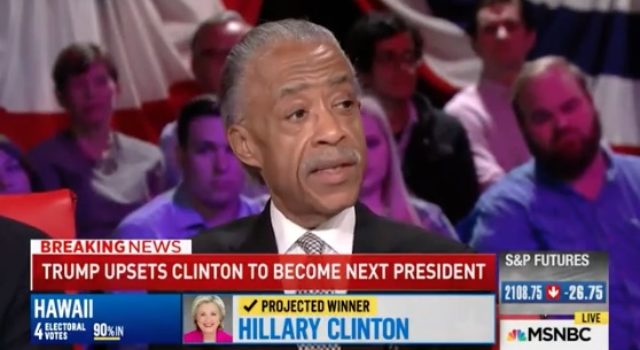 “I think we are in a real moment…like Nixon”???

“He [Trump] did all of the dogwhistles. This is not Bernie Sanders populism, this is George Wallace populism that he’s doing.

“But he cannot say he did not run a campaign that has created a lot of racial fears and a lot of divisiveness and he played to the crowd and he knew what he was playing to.”

There is no denying that Al Sharpton is not a happy camper, not even close. He is however, accepting that yes, Trump has become the President, but then follows up with a sort of threat…

“Trump need to know we are not going down without a fight.” After this statement, he got a few golf claps from the live audience.

I know him here in New York. He knew exactly what he was doing. He was playing to the worst elements. The question is now what are you going to do?”

Interesting isn’t it? Here is a man who is your classic pot calling the kettle black and he’s being real loud and proud about it too as he does so. How do people become so blinded to the reality of things…? It’s just unbelievable at times.

He should just do us all a favor and go pay his back taxes.

With all the visits this man has made to the White House under Obama’s reign, how many do you think are going to be happening after January 20, 2017?

This is a video very worth watching…