Lib Rag Salon: You Must Get Rid Of Your Dog To Save The World From Global Warming 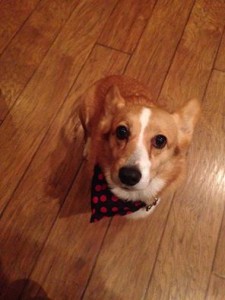 Bixby, my dog. Causing global warming, one paw at a time

The HORROR! She is clearly planning to do…something.

Last week President Obama announced a historic climate change agreement with Chinese president Xi Jinping. Aimed at drastically curtailing carbon emissions into the atmosphere, the goal is to rein in the carbon footprints of the planet’s two major polluters, the U.S. and China.

I wonder if the agreement contains anything about carbon paw prints. While humans and their ravenous appetite for growth remain the primary drivers of climate change and the accompanying specter of climate catastrophe, pets have a surprising negative impact of their own. Bowser and Mittens may be your best friends, but with around one billion pet dogs and cats in the world, eating billions of pounds of canned meat a year producing half a billion pounds of waste daily, Mother Nature might just consider them to be—after humans—Public Enemy Number Two.

Cats and dogs eat meat-based diets, and we all know that is the most energy intensive diet there is. Then there is the staggering amount of bacteria-laden fecal material these beloved creatures produce. American dogs alone are responsible for 10 million tons of waste a year. Can anything be done to make our pets more planet-friendly?

You consider yourself an environmentalist and are considering ditching that gas-guzzling SUV you bought a few years ago in order to reduce your carbon footprint. You might want to think of ditching Bowser instead. An average-sized dog consumes about 360 pounds of meat in a year and about 210 pounds of cereal. Taking into account the amount of land it takes to generate that amount of food and the energy used, that makes your dog quite the carbon hound. A 2009 study by New Zealand’s Victoria University of Wellington concluded that pet dogs have carbon paw prints double that of a typical SUV. John Barrett of the Stockholm Environment Institute, in York, Great Britain, confirmed the results of the New Zealand study. “Owning a dog really is quite an extravagance, mainly because of the carbon footprint of meat,” Barrett told New Scientist Magazine.

OK, so maybe Bowser needs to go. How about Mittens? Well, Mittens is better than Bowser, but she still leaves a carbon paw print equal to that of driving a compact car for a solid year. The average carbon paw print of our dog or cat is higher than an average human from countries like Haiti or Afghanistan.

While we love our pets, they share our propensity to wreak havoc on the world, and not just by generating carbon. In Great Britain, for example, there are around 8 million cats who yearly kill (conservatively estimated) around 200 million wild animals, including many threatened songbirds and other species. That’s around 25 kills per feline. (Cat owners can dramatically reduce this carnage by keeping their pets indoors or by requiring them to wear CatBibs when they are outside.)

Or how about…no. Idiots. My pup is my life. Well after my kids, of course. Animals have been around, eating meat, forever. They have been human companions for over 12,000 years. The saddest thing is that some liberal hippies will read this and actually believe that the pets need to vamoosh. So shelters? Kill them all? I don’t see a humane way to kill every pet in America. Not to mention its ludicrous.

What do you think? Should your pets be banished? Or sent to kill shelters?