Millennials, *sigh*. So this crazy VIDEO went viral when an overly sensitive college student demands that her friend REMOVE his Trump hat. She insists that it’s ‘hate speech’ and not allowed on campus. She totally freaks out in this video and is so emotionally upset that a guy who appears to have a crush comes to her rescue. No really, like Jr. High when the cute girl gets all upset and the nerd finds his chance to help her. Anyway, this ‘adult male’ yells, “Go Away, Go Away!” then steals the other guy’s Trump hat. I am NOT making this up. It all happened. 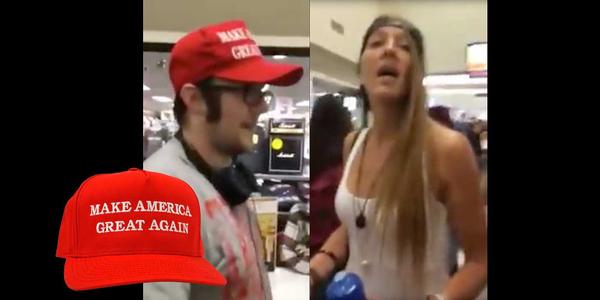 [1]
Check out the transcript:

Liberal Fruitcake: You have to take the hat off. You’re not allowed to share hate language at the University. ‘Make America Great Again’ means make America all for white people, no immigrants, no people of different sexual orientation.

Trump Supporter: His wife is an immigrant

Liberal Fruitcake: It doesn’t mean anything, I could have a brother who is gay and not be supportive of gay people.

Trump Supporter: You said he doesn’t like immigrants, His wife is an immigrant, it’s illegal immigrants that he doesn’t want.

Liberal Fruitcake: You’re not even connecting, just because he’s married to an immigrant doesn’t mean the policies he’s promoting…

Liberal Fruitcake: Listen dude we are friends and I have to level with you, you’ve got to take the hat off or I will write the President of the University and he’s going to come and talk to you because I already talked to him about this. It’s not allowed, it’s hate language on campus. You can deal with me or you can deal with…

Liberal Fruitcake: You can laugh but this is so gonna happen. I can’t wait for him to come and talk to you about this.

Bystander: He’s allowed to wear any hat he wants. What’s wrong with it.

Liberal Fruitcake: You can come with me now or…. it’s wrong.

Super Excited Guy (nerd guy who has a crush on Liberal Fruitcake and no chance in h*ll with her): GO AWAY, GOOOO LEAVE!

Bystander: Keep wearing the hat man, that is insane, this is all on camera. If I had my Trump stuff, this girl is…

Super Excited Guy runs by and steals the hat off the guy’s head. REALLY? These college students are arguing over a hat. The Liberals on campus DO NOT believe in free speech and believe it’s their right to stop it at all costs including stealing the hat like they were fourth graders. Absolutely insane y’all. WATCH this video: