Liberal Heads Explode as Donations Top Over $800,000 for Memories Pizza

When liberals ran a pizza place out of business because the owner answered a reporter’s question in a way they disagreed with, conservatives went to help that owner out.  Liberals, as they are wont to do, cried conspiracy[1].  Here’s an example… 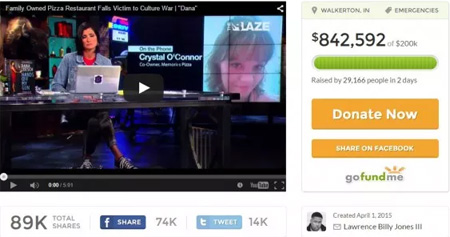 Kandyce Brothers: gogfundme raised just over 840k with almsot 30,000 donors. do the math that would make each donor giving approx almost $29,000.00?????? ooooh come on now that anyone belieces this wasnt a dirty GOP trick to garner support for conservatives. This was koch brothers funded and media manipulated to make liberabls look extremely bad. The right wing propaganda machin strikes again