Capitalism is actually fairly easy to understand. It is a self-regulating system that goes haywire when social justice warriors mess with the basic market conditions. Though many liberals crusaded to bump the minimum wage to $15 an hour, they are now seeing the consequences as UC Berkeley has announced that 500 people are losing their jobs[1] as a result of California’s “successful” campaign to raise minimum wages. 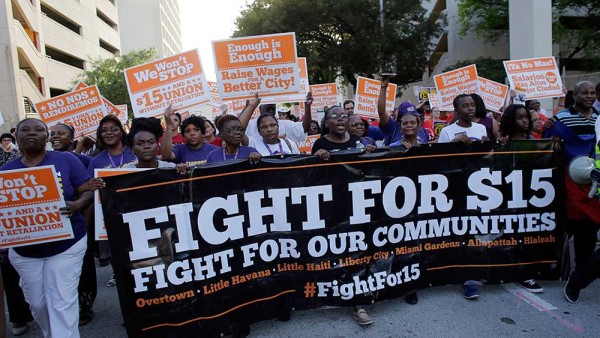 But I repeat myself.

Hundreds of employees at the University of California at Berkeley are getting schooled in basic economics, as the $15 minimum wage just cost them their jobs. Too bad liberal elites “fighting for $15” don’t get it.

Last year, University of California President Janet Napolitano announced plans to boost its minimum wage to $15 at the start of next school year, independent of the state law.Since UC Berkeley was already in financial trouble — it ran a $109 million deficit last year and is projecting a deficit of $150 million this year — number crunchers there had to have factored in the higher mandated wage when making their layoff decisions.

Those workers might want to have a chat with the folks at UC Berkeley’s Center for Labor Research, who just days before Brown signed the wage-hike bill released a study touting the minimum wage as a boon to low-income household breadwinners.

After that report came out, Ken Jacobs, chairman of the UC Berkeley center, told the Los Angeles Times, “This is a very big deal for low-wage workers in California, for their families and for their children.”

It is a big deal, as well, to those soon to be out of work UC Berkeley workers….

Congratulations, liberals! You achieved that strike against evil capitalist practices only to find yourself on the unemployment line with many hard workers who tried to warn against this kind of liberal greed.

Wealth is not created by simply raising the minimum wage and “giving” people more money. This money must come from somewhere and that means raising prices for goods and services and often cutting work forces.

This is basic economics, people!