LIBERALS save Planned Parenthood from being stripped of cash DESPITE Videos of selling baby body parts!

There is no organization liberals are more intellectually dishonest about and in the pocket of than Planned Parenthood.  So really, this shouldn’t surprise anyone[1]… 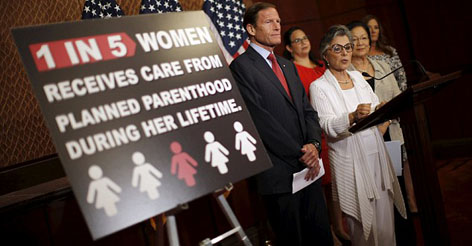 The derailed legislation was the Republican response to videos, recorded secretly by anti-abortion activists, showing Planned Parenthood officials dispassionately discussing how they sometimes provide medical researchers with tissue from aborted fetuses as the sipped wine.

Those videos have led conservatives to accuse the group of illegally selling the organs for profit — claims strongly denied by Planned Parenthood — and inserted abortion and women’s health into the mix of issues to be argued in the 2016 campaign.

Monday’s mostly party-line vote was 53-46 and fell seven short of the 60 votes the Republicans needed to halt Democratic delays aimed at derailing the bill.

Honestly? Part of me is ok with this.  As more videos come out and more moderate, mainstream voters are exposed to what Planned Parenthood really is, they’re going to see who supports them and start to vote accordingly.