Look at What Was Caught on Camera Before the Democratic Debate

Looks like one of the most interesting moments[1] during the debate last night, actually took place before the debate even began! Some people are finding it hilarious…and others are more, well…disgusted. 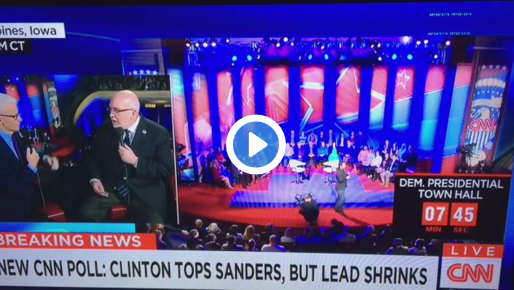 Last night’s Democrat debate was the perfect thing to watch if you were a) liberal, b) live in one of the first primary states and c) haven’t made up your mind whether you’re going to vote for a congenital liar, an admitted socialist or a virtual unknown.

If you were anybody else (and, let’s face it — given that you’re smart enough to come to this site, you probably are), you were probably better off watching almost any other channel. Well, except MSNBC.

However, if you missed the CNN debate, you needn’t worry. We have the single most Democrat-y moment of the entire evening for you, and it happened before the debate even began: practice clapping.

You read that right. Practice clapping. Apparently, Democrats need to practice how to properly respond to their own candidates. I so wish I were making this up, but here you go:

CNN Town Hall audience has to practice how to applaud candidates when they take the stage… pic.twitter.com/WCddInX2Vw[3]

That’s right, folks. Democrat voters are dumb enough that they don’t know how to clap properly, and Democrat debate organizers are fake enough to teach their sheep how to do it.

Quick question…as far as their shoes go, who ties the laces for them? Or…do they all just wear slip-ons? …loafers?