‘I love you so much’: Virginia state senator Creigh Deeds reveals final words to his bi-polar son as he was attacked with a knife…just moments before 21-year-old committed suicide

Parenting is hard. Kids are hard. Your kid has mental illness? Even worse. This poor father, and senator had this horrible ordeal with his son’s mental illness: 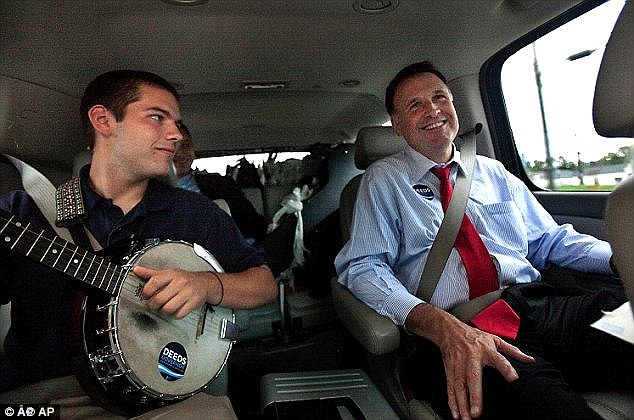 Happier days for father and son

Virginia state Senator Creigh Deeds has come forward to reveal his final moments with his son Gus, nearly a year after the mentally-ill young man tried to kill him in a knife attack.

On November 18, 2013 Deeds obtained an emergency custody order to admit his suicidal son to a psychiatric ward, but that order expired before they could find him a bed at any hospital

The following morning, Deeds was feeding his horses when his 21-year-old son approached and suddenly started stabbing him with a knife.

Deeds, now 56, says his last words to Gus were ‘I love you so much’ and that after uttering the statement, Gus let up and he was able to make his escape.

Deeds ran away from the house where he was rescued and taken to the hospital. Police later found Gus dead from a self-inflicted gun shot wound.

His daughter Susannah and second wife Siobahn believe it was those words of compassion that saved Deeds’ life.

‘I like to believe what Susannah said – that when I said “I love you,” that broke through,’ Deeds told the Washington Post. ‘That he was still delusional, but that did break through, and the old Gus heard that. Not the old Gus — Gus. That those things that had taken over Gus were defeated.’

Still, Deeds admits he may never know the real truth behind his son’s motivations that day and he’s still haunted by what he could have done differently to prevent Gus’ suicide.

Gus first started showing signs of mental illness after his first year at the College of William and Mary, when he got dumped by a girlfriend after visiting her in her native Colombia.

But he continued to do well in school, making the Dean’s List. He took the fall of his junior year off to help on his dad’s gubernatorial campaign. When that campaign failed, and his parent’s broke up, Gus went on a cross-country road trip, writing bad checks along the way and getting baptized in Oregon.

His father found the trip strange, but figured it wasn’t altogether unusual for a young person.

Gus’ parents became more concerned when he took of another semester in the spring of 2010 to work in Gary, Indiana. His mother took him for a psychological evaluation and Gus was diagnosed with bi-polar disorder. However, doctors were optimistic and believed he wouldn’t need to be medicated his whole life.

‘I believed in Gus,’ Deeds said. ‘I believed he would snap out of it.’

It’s important to remember here that Gus was not in his right mind. He was no longer Gus. He was making terrible judgment calls because of his mental illness. Because of his illness, he attacked his own father and then killed himself. His dad, however, as a Senator, has made mental health his cause. He has increased the emergency custody orders from 6 hours to 12.This should allow more people to help those they love, and avoid tragic situations like this one from repeating.