A video from a Gay Pride parade in Brazil featuring a young boy performing a sexually suggestive dance has gone viral and is provoking a big response from both supporters and detractors. 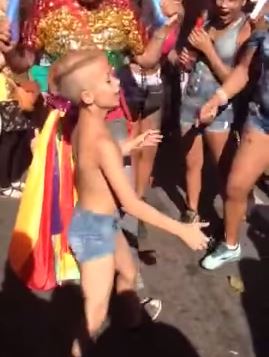 Homosexual news outlets are defending a sexually suggestive video of a young boy grinding and twerking — to the applause of drag queens and LGBTQ revelers — at a ‘Gay Pride’ parade that allegedly took place this summer in Brazil.

The video, viewed over 270,000 times, shows a young boy clad in nothing but a clinging pair of cut-off jeans gyrating sexually to RuPaul’s song “Sissy That Walk.” At one point he drops to the ground with his legs apart pounding the asphalt with his groin to the beat of the music.

The unidentified boy, thought to be between 8 and 12 years old, was praised by PinkNews for “upset[ting] homophobes” and by GayStarNews for using sexually explicit “dance moves” to “fight homophobia.” GayStarNews has since amended its story after the YouTube restricted video went viral this week when it was picked up by conservative outlets.

“It is, however, where we are headed as a nation. The sexual anarchist agenda steamrolls ahead and children are in the cross-hairs. The organized ‘LGBT’ lobby has long lusted for the abolition of all age of consent laws. While not all ‘gays’ are child abusers, pederasty has been a central aspect of the homosexual lifestyle since the days of the Greek bathhouse,” he said.

Whether gay or straight, using a child in a sexual manner like this is horrific.