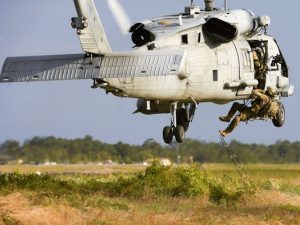 [1]This is a cost cutting move may that affects field operations. Why not cut down on Pentagon bloat instead?

Navy Times[2] reports after more than a year in limbo, the Navy has decided to shutdown one of its two dedicated special operations helicopter squadrons, in a money-saving reorganization to retain the service’s spec ops expertise.

In March, the Navy will shutter Helicopter Sea Combat Squadron 84 in Norfolk, which, along with HSC-85, has flown a decade of shadowy missions in war zones with aging helicopters. The active-duty and reserve aircrews that fly these HH-60H Rescue Hawks are the Navy’s equivalent of the Army’s renowned 160th Special Operations Aviation Regiment, known as the “Night Stalkers.” In their decade of continuous deployments, HSC-84 aircrews have earned three Distinguished Flying Crosses, 13 Bronze Stars, 120 Air Medals with Valor, among other awards.

The two reserve squadrons have been providing special operations forces support for decades, but the Navy has wanted to shut them down and farm out missions like SEAL training and insertion to fleet squadrons to save as much as $27 million a year. But some argue that missions like nighttime raids and special patrol insertion/extraction are dangerous and rare, demanding highly specialized aircrews rather than fleet pilots who juggle this training with routine missions like search and rescue.