Many people didn’t notice, or possible even care, that a 40-year old woman was being sexually assaulted on a train platform. Thankfully, Maurice Osborne was not one of those people[1]… 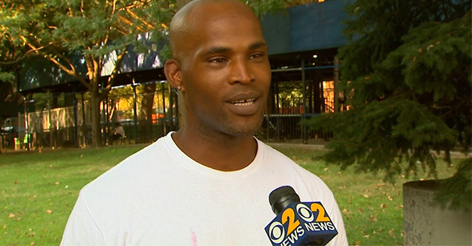 “As soon as she said that he was trying to rape her, I just reacted,” Maurice Osborne told CBS2’s Matt Kozar on Friday.

Despite getting six stitches above his left eye and a swollen right hand that looked more like a waterballoon, Osborne said he’d do it all again.

Asked if anyone else was going to help the woman, Osborne said, “Nope. I wish someone else did. I wish the conductor stayed. The conductor didn’t even stay. The train left.”

Watch more below. Osbourne, who is studying to be a medical assistant, says, “I like helping people. It makes me feel useful.”