A pet is family and most people would do anything for family. Would you do anything to save the life of your dog? One man went to tremendous lengths to save his dog[1] after the pooch was attacked by a crocodile. 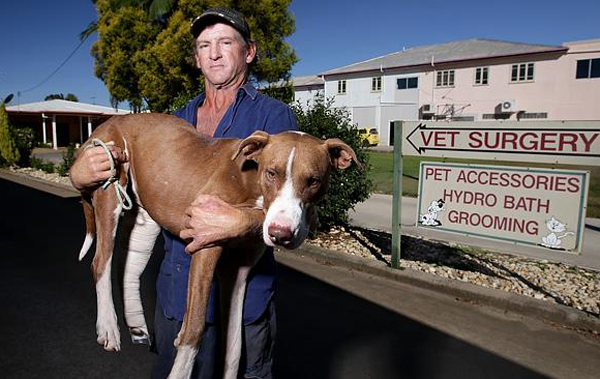 Dogs time and time again prove their devotion to us. But humans don’t always show it back.

Australian man Wayne Best, however, is the exception.

On a trip through the Australian bush with his 3-year-old dog Choco, his pup chased a feral pig by the banks of the Mitchell River when a large crocodile erupted out of the water and attacked the dog. Best recalled to The Cairns Post the harrowing moment[3]:

With no vehicle to transport them and the nearest road over 60 miles, Best then hiked through the woods carrying Choco. When Choco got too heavy, Best would feed him painkillers from his first aid kit so the dog could walk a little. Then he would pick him up again.

Once they got to a road, they were able to hitchhike to a Vet in Mareeba, where Choco received emergency care. Choco ended up requiring extensive surgery to repair his broken hind leg.

Dr. Ethan Maloney praised Best to The Cairns Post for bringing Choco straight to the nearest veterinary clinic as soon as he could, saying it was the right thing to do.

As for Best, he’s just grateful that Choco is alive and on his way to recovery–and he would do it all over again for his pup:

“He’s my mate. He’s like family to me. He’s my best friend to me in the whole world. Money means nothing to me. I just want him better. I walked a long way for him, but I would have walked a million and one miles for him if need be.”

Bravo! Dogs are man’s best friend and it’s clear that Best has no problem returning the favor.