What does it take to keep illegals out of our country? An illegal that ran-over a Dallas police officer has been deported an astounding 3 times already.[1] 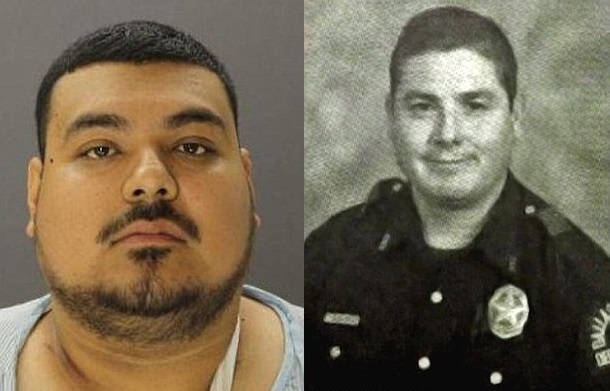 A 29-year-old man ejected from a Dallas nightclub over the weekend was shot by police after hitting two off-duty officers in uniform with his SUV, seriously injuring one, police said on Monday.

It emerged this week that the man, identified as Eduardo Gonzalez-Rios, was reportedly deported three times in the past eleven years.

Gonzalez-Rios was removed from the Kalua Discotheque by bouncers after a disturbance inside the club shortly before midnight on Sunday, Dallas police said.

The suspect retrieved his black SUV from the valet station and backed into one of the officers before plowing forward over a curb, striking the second officer and dragging him at least 15 feet, police said.

A Dallas police news release[3] said: ‘According to witnesses, this is when officers opened fire on the suspect striking him. The vehicle driven by the suspect crashed and the he was subsequently taken into custody.’

The second officer, identified by the Dallas Morning News[4] as Senior Cpl. Ed Lujan, was taken to a hospital in stable condition with broken bones, a severe head laceration and other injuries, police said.

The officer who was struck first by the SUV was not seriously injured.

The first two times were in the Harlingen, Texas, area with the third being in Kansas City, Missouri, according to the television station.

He has been charged with aggravated assault on a public servant, a first degree felony that can bring up to 99 years in prison.

According to Fox4News[6], he ‘was booked into the Dallas County Jail on Wednesday’.

A GoFundMe page[7] set up to help with Lujan’s medical expenses has already raised over $3,000.

The next time a Democrat or a RINO “Republican” tries to identify amnesty as a moral imperative, please remember this story and the danger posed to society by the millions of illegals that reside within our borders in violation of our laws.