This Man Just TICKED Off A WHOLE Bunch Of Liberals…BLACK RIFLES MATTER!? [VIDEO]

LOLs! This story cracks me up. One man has a town up in arms (well not up in arms because they’re trying to ban them) over a sign he put up in his yard. Turns out he has a permit for that sign and any other he puts out there. This man LOVES his signs and this one is a doozy. The words that have people riled up? ‘Black Guns Matter’. 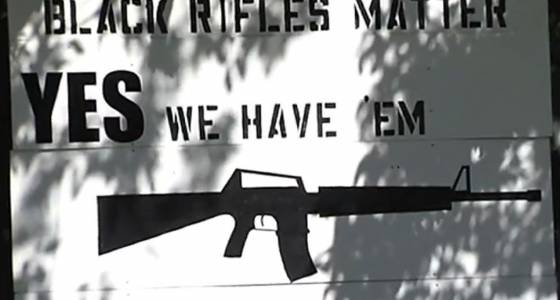 That’s right folks, a man with a clever idea to tell you his opinion is the center of a Boothbay Harbor controversy. To be fair, I doubt much is ever going on there, so it only makes sense that this would be ‘BIG news’. The sign is placed on his property and the Town Manager Thomas Woodin says that Sample is exercising his First Amendment rights to free speech and has all the proper permits for a sign of that size explaining that, “There isn’t much the town can do about it.”

Linc Sample, the sign’s creator, tells NECN that his work[2] in Boothbay Harbor is about gun rights, not race. He was inspired to post the sign after reading an ad in the local paper that supported a ban on assault weapons.

While many have called for the sign’s removal, Boothbay Harbor officials say Sample has the proper permitting and is exercising his First Amendment rights.

Few people really complained, it seems the biggest complainer about the whole thing was the local Director of the Chamber of Commerce, Rick Prose. He went as far as to say that this one sign was hurting the tourism industry and people were ‘cutting vacations short because of the sign’. REALLY? Do you believe him? Sometimes the leftist fanatics leave themselves open for ridicule. For more fun ridiculing of Liberals and guns, WATCH this funny video about Gun Control: