Man KILLS His 92-Yr-Old Navy Vet Grandfather, Then Called 911 AFTER Doing THIS Online!

A pathetic, murderous coward killed his own grandfather for no other reason than he wanted to do it. Unbelievably, this young man not only killed his grandfather, but also bragged about it online immediately after the deed. His crime is truly shocking[1] and a sad indicator of the kind of lack of humanity present in society. 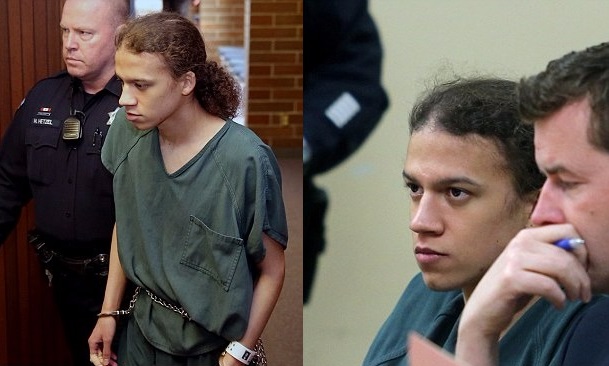 A man charged with killing his 92-year-old grandfather told police he visited an online forum after the stabbing and told others what he had done, court documents say.

He is charged with killing Hurene ‘Hap’ Jackson, a Navy veteran, sometime on Monday or in the early hours of Tuesday.

Sheriff’s deputies responded to the home just before 2am Tuesday after 911 dispatchers received a call from a man saying he had been drinking heavily and had killed his grandfather.

According to court documents, Jackson also told detectives that he had researched the suspension of Washington state’s death penalty laws beforehand because he had planned to kill his grandfather.

Jackson pleaded not guilty Wednesday and is being held on $2million bail, The Kitsap Sun[3] reported.

According to documents, Jackson told investigators he confronted his grandfather in the bedroom with two knives and reportedly asked whether ‘he was ready for what’s going to be happening tonight?’ and if he wanted to die ‘slow and painful’ or ‘fast and quick’.

Jackson said he stabbed his grandfather in the chest, but the blade was stopped by the victim’s wallet.

He then stabbed the grandfather several more times before the older man began fighting back, court papers say.

After he stabbed his grandfather, Jackson told detectives he put the knives in the kitchen sink at his grandfather’s Rocky Point residence, went back to his bedroom and visited a website called sociopath-community.com where he told strangers what he had done, according to court documents.

Over the next hour, he chatted on the website.

‘I feel kind of good,’ a person using the handle AnotherPointlesUser[4], believed to be Jackson, wrote on the Internet site. ‘Kind of like losing my virginity actually.’

However he seemed to regret the alleged killing, writing ‘The look of sadness before he died crushed whatever should [sic] I had left inside,’ and ‘I still can’t believe he’s dead’ and ‘My dad is the one I hate’ and ‘I wish this was a dream.

He said his grandfather mostly raised him – and also promised to send pictures of the bloody murder scene to others on the site who were requesting them.

He then reportedly listened to music before calling 911 to report the killing.

He allegedly told the 911 dispatcher that he was ‘completely sober’ before the killing and that ‘it just felt like something I wanted to do, I did it.’ He added that there was no major argument before the alleged murder.

When asked by dispatch whether his grandfather was still alive, he is said to have sounded hopeful and said, ‘Could he still be alive? Do you think?’

He then began sobbing.

The suspect’s father, Will Jackson, had little sympathy for his son, telling KIRO [5]that the 21-year-old was was ‘very selfish, very ignorant and very disrespectful’. He ‘wanted what he wanted when he wanted it,’ Will said, adding that he had threatened the old man in the past.

Remember: this sick SOB researched the death penalty statutes before committing the murder. Please remember this fact the next time a liberal tries to tell you that death penalties do not deter murderers.

Our justice system is in desperate need of repair. Though this scumbag should be entitled to a trial, upon conviction, his sentence should be carried-out in swift order.

However, thanks to liberal insanity, this piece of work will get three hots and cot for the rest of his life and even if he had committed this heinous crime in a state that executes people, he would still enjoy 20+ years of life before quietly drifting-off to sleep peacefully- a fate that he did not offer to his own grandfather.

It is time to not only bring-back the death penalty in all states, but to actually use it.