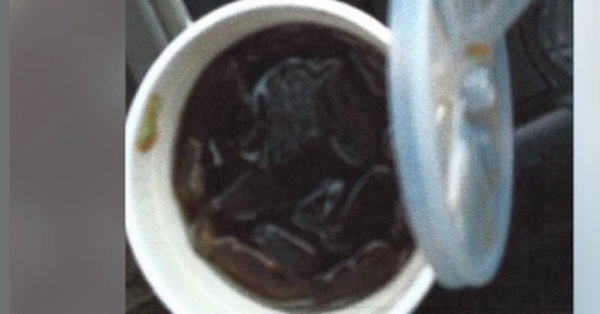 Before they left the restaurant, Ken asked for his soda to be refilled and Lamica took the cup into the kitchen and returned with a “to-go cup.” After taking a few sips from the straw, as he put the soda inside his car’s cup holder, the top popped off, revealing what Yerdon suspected to be spit.

But it wasn’t just saliva.

“It wasn’t regular spit either,” he told Syracuse.com. “It was definitely a loogie.” He snapped a photograph of the suspicious soda.

They then got the state troopers involved and, after a DNA test, the bro admitted what he did and had to pay a fine. The couple is now suing Chili’s.

Seriously restaurant employees, do you not know what social media shaming is?