HOLY CRAP! This is the most disturbing and creepiest thing I’ve seen in so long! No jump scares needed, what this guy captured on film is PLENTY scary enough…and then some! He was trying to catch his girlfriend eating his food, but learns it was never his girlfriend…it was someone else.[1] 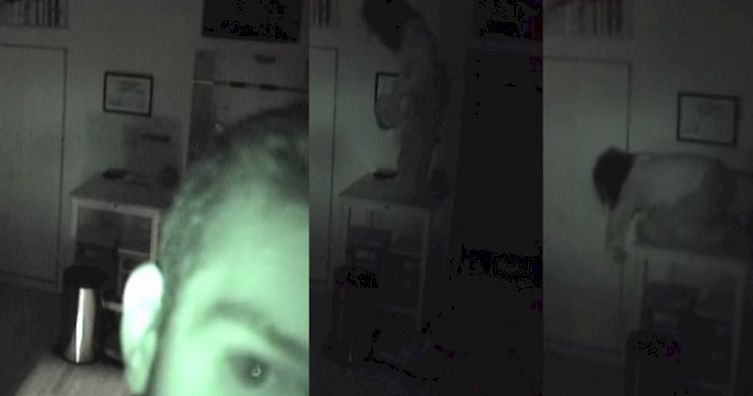 Obviouslym people wanted to know more…and had to know if it was real or not. So he answered some questions for us…and the answers just make the whole situation even more creepy!

So I have been inundated with questions since this was posted and I thought it wise to give answers to some of the most frequently asked questions.

#2 – What did you do when you saw the footage?
A – I immediately left my apartment and called the police.

#4 – What was it she actually climbed down from?
A – It is a storage loft/area in the apartment. It has no connection to any outside ventilation or anything of that such. It does go pretty deep back in there, almost all the way to over the stove/kitchen area. She had set up a little nook for herself.

#5 – How did she get in there?
A – I have no idea, the only way she could have gotten in is through the window, as I am on the top floor and there is a fire escape. The police think she was probably coming in to rob me when I was gone and decided to stow away in the crawl space. Supposedly this isn’t the first time the cops had come across something like this.

#6 – How long was she in your apartment?
A – The police officers thought it looked as though she had been there for at least a couple weeks, although could have been longer.

I would move. I’d never be able to feel safe again in that apartment. I mean…the space is still there! I can’t even imagine…staying there after.