Old and feeble? Not this Utah woman. 69-year-old Frances Mach stood up to her would-be carjacker[1], 38-year-old Christopher Bigler, and he couldn’t believe it. 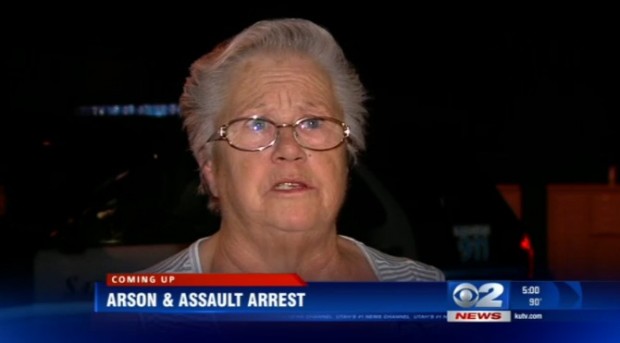 “He says ‘take me out of here…go!” Mach told KUTV. “He started to reach for the steering wheel and he smacked me with the other hand and said ‘go!’”

That’s when Mach said she fought back.

“I just balled up my fist and I nailed his head about three or four times and told him to get out of my car,” Mach told KUTV.

Things then took a sudden turn. Mach said that the man ran outside her car and straight into her daughter’s home. When officers arrived, they saw a fire upstairs, thought to have been started by Bigler.

“We were able to clear the downstairs but each time we entered in the upstairs, the smoke was so strong the officers were unable to go completely into the house,” Saratoga Springs Police Sgt. Grant Ferre told KUTV.

Eventually, officers apprehended the 38-year-old. He was taken to a local hospital for treatment related to smoke inhalation. The suspect also sustained injuries as a result of Mach’s punches.

“He couldn’t believe it, I’ll tell you what, because I fought back. He looked about half scared,” Mach said, recounting the moment she punched Bigler. “They told me his face was already starting to swell, so I must have landed him pretty good.”

This courageous woman shows us all that age is just a number. She proves that you can still be successful standing up for yourself, no matter who you are or how old you are.