In a truly amazing and inspirational story, a man who became a victim of a terrible fire when he was six fought back against the flames later in life in the most literal of ways: he became a fireman. The Daily Mail[1] reports: 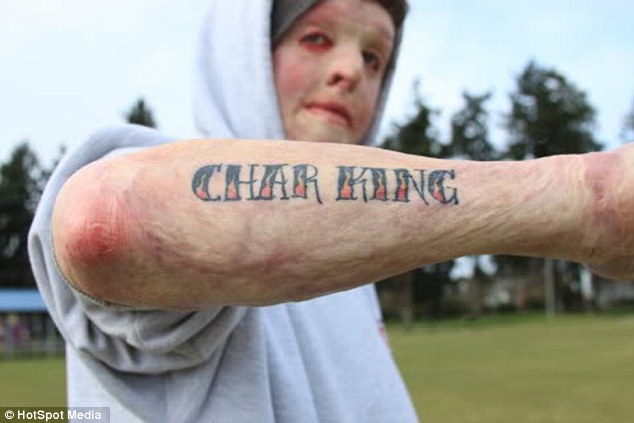 An American who suffered third-degree burns to 70 per cent of his body in a childhood accident has faced his fears by becoming a firefighter.

Terry McCarty was just six years old when he was engulfed with flames after his brothers filled a bowl with kerosene which was set alight and accidentally knocked on to him.

The 29-year-old, from Hawthorne, Nevada, endured 58 operations as well as cruel taunts from bullies who called him Freddy Krueger because of the scars on his face, body and arms.

But he was determined to overcome the harrowing experience that had crippled his confidence for years.

He said: ‘After the accident I lived in a constant state of fear and uncertainty.

‘I struggled to find work as an adult as people always told me I was a liability, and I had started to believe it.

‘Becoming a fireman was a spur of the moment decision – I thought if I could do this, people would realise I could do anything.’

Mr McCarty applied to a Washington fire service in October 2011.

After his application was accepted in April 2012, he faced 12 weeks of gruelling training, where he confronted fire for the first time since his accident.

He said: ‘As part of my training I had to complete a live fire exercise, where fire is made using propane in an artificial setting.

‘Fear washed right over me, just as the fire had all those years ago.

‘I couldn’t move, I felt like I was six years old again when I saw those flames shooting out of the ceiling.

‘But I think it helped. In the end – I started to realise the fire didn’t control me. Why should I let fear take over my life?’

In July 2012, having passed his training, Mr McCarty won the admiration and respect of his colleagues and the public.

He said: ‘Attending events, or even just being out in public in my uniform, always attracted a mixture of shocked and awed reactions.’

Mr McCarty lost part of his fingers and thumbs in the accident and had to teach himself how to quickly put on his uniform and air tank and properly brace himself with his hip when using a hose.

Having spent two years as a firefighter, he quit the force to work with the Burned Children Recovery Foundation at Camp Phoenix, a programme in Bellingham, Washington, supporting children with burns.

He said: ‘Fire robbed me of my childhood – I wanted to give these children a chance to experience being a kid, even for a short time.

With our daily news cycle being loaded with discussions of a supposed “wage gap” and the constant assertion that institutional racism is present in virtually every interaction in America, it’s easy to lose sight of what real adversity is.