Locals reported a suspicous man sleeping in their park…and when a Police Officer arrived on the scene to check out the situation…something VERY unexpected happened![1] 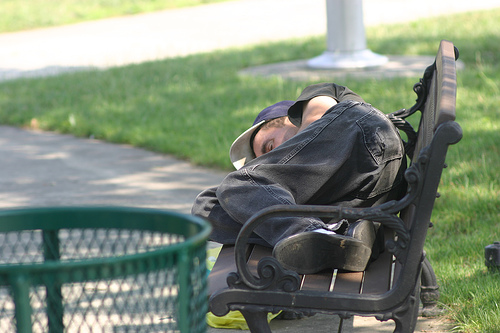 In July, an officer helped a young mother who was caught stealing diapers. She was later booked on federal drug charges, but officers say nothing is going to stop them from being good Samaritans.

What one officer did this week, is proof. Following a call for suspicious person at a park, officers arrived to find a greater story.

“Sometimes I have to sleep outside because I want to keep my job. That’s just how it is,” Samuel Meixueiro said.

He says he’s fallen on hard times. With a checkered past behind him, he says a lot of doors have been shut in his face. He lost his home and has been sleeping in a church; walking from Kansas City to Mission every day for work.

“It’s a five-to-six hour walk. I’ve been doing it so I can keep my job,” Meixueiro said.

On Tuesday, he decided to take a break in Sweeney Park before work. Someone nearby saw him and thought he looked suspicious, and called the cops.

“He shook my hand, we had a chat like I was talking to a friend of mine,” Officer Zach Stamper said.

“As I told him my story he started loosening up. Started realizing I’m not a vagrant. I have a job. I’m doing the best I can,” Meixueiro said.

Officer Stamper gave him a ride to work, but Meixueiro`s story stuck with him long after he dropped him off.

“I was like, wow. My commute, I drive to work and it’s done. I couldn’t imagine spending five hours a day traveling back and forth to work, let alone on foot,” Officer Stamper said.

He came back a half-hour later with a bike for Meixueiro and a duffel bag for him to carry all of his things in.

“I cried. I couldn’t believe it. Things are so hard for me right now. Any kind of help is just a blessing,” Meixueiro said. “Thank you from the bottom of my heart.”

“It made my day. It made my career,” Officer Stamper said.

Meixueiro says the bike meant the world, but what meant more is someone believing in him and his future. The pair exchanged phone numbers and plan to stay in touch for a long time to come.

This is a great example of how a good deed blesses the lives of the giver and receiver. God Bless the man that chose to endure through his hardships, and God Bless the Police Officer who took it upon himself to truly protect and serve.