Man Whose Blood has Saved Millions of Babies Will Make His 1,106 Blood Donation

Known as the “Man with the Golden Arm,” James Harrison has been donating blood for over 60 years. It is estimated that he has donated enough blood to save over 2 million babies from Rh incompatibility.[1] 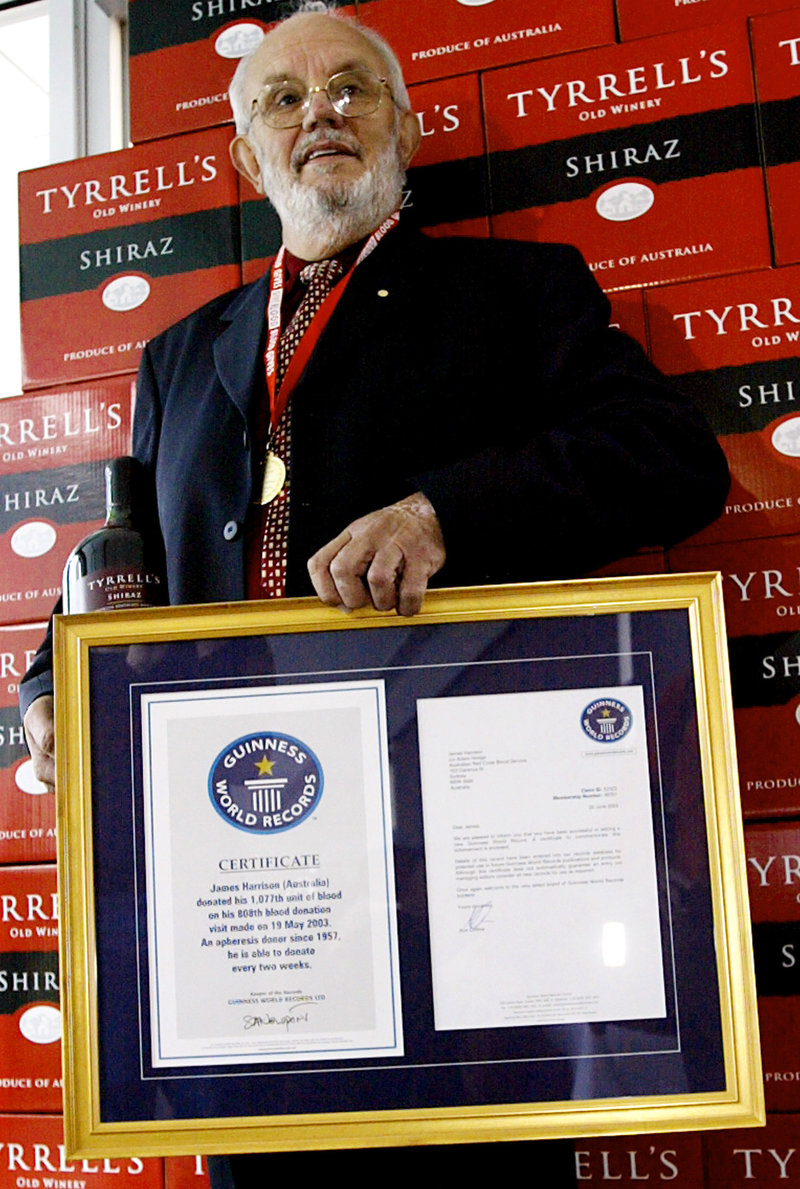 When James Harrison was 14, he got really sick. One of his lungs had to be removed, and he needed a lot of blood.

“I was in the hospital for three months and I had 100 stitches,” he recalls.

After receiving 13 units — almost 2 gallons — of donated blood, Harrison knew right away that he wanted to give back.

“I was always looking forward to donating, right from the operation, because I don’t know how many people it took to save my life,” he says. “I never met them, didn’t know them.”

So when he turned 18, Harrison started giving blood and plasma regularly — every three weeks or so for 11 years.

Meanwhile, doctors were struggling with cases of a potentially fatal condition called Rh incompatibility, also known as rhesus isoimmunization or Rh disease. It occurs when a pregnant woman has an Rh-negative blood type but the fetus she’s carrying is Rh-positive.

In some pregnant women, Rh disease causes their antibodies to attack the fetus’s red blood cells. Scientists needed a way to turn this reaction off, and in Harrison’s blood, they found it: a rare antibody known as Rh (D) immune globulin or anti-D.

Doctors believe Harrison has anti-D because of the blood he received at age 14. And so Harrison became the first anti-D donor in Australia — and the most prolific. He’s in the Guinness World Records and is known at home as “the man with the golden arm.”

“I was prepared and wanted to give something back,” he says. “And I’ve been donating for 60 years.”

At this point, he has donated enough to save an estimated 2 million babies — including his own grandson, Scott.

And in 2011, when Scott turned 16, he made his first donation, sitting right next to his grandfather — who was making his 1,000th.

“The whole family are blood donors. And that makes you feel proud, too,” Harrison says.

Harrison is 78 now. At 81, he’ll have to hang up the tubes and needles and retire from donation. Those are the rules.

Others need to step up, he says. If you’re healthy, why not?

When he is told that he is a hero, he says “But I’m in a safe room, donating blood. They give me a cup of coffee and something to nibble on. And then I just go on my way. … No problem, no hardship.” But if you were to ask any of the 2 million people who have been saved by his donations, hero would certainly be one of the descriptors.