I…don’t even know what I’m looking at here.  A factory worker in China had his arm chopped off…and doctors saved it by[1]…sewing it to his leg and letting it heel… 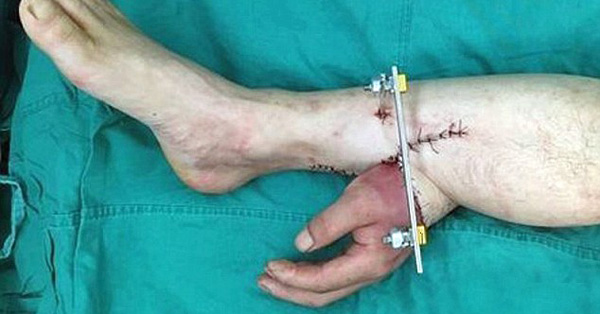 It happened after a factory worker called Zhou had his left hand chopped off during a work accident involving a spinning blade machine.

He was rushed to the Xiangya Hospital in Changsha where doctors assessed his situation.

Dr Tang Juyu, head of microsurgery at the hospital, decided he could give Zhou a chance to ‘revive’ his lost hand – with an operation he and his team had already successfully performed once in 2013 under similar circumstances.

After it healed for a month by being grafted to the guy’s leg, doctors were able to reattach it successfully to his arm. My question…how do you even think to do that?