Marine Disfigured By Bomb Stands Up at Trump Rally… What Happens Next? Unbelievable!

During a recent rally for Donald Trump, a Marine who was disfigured while on duty when a bomb hit[1], got an opportunity to share his story. Now, that story is going VIRAL! 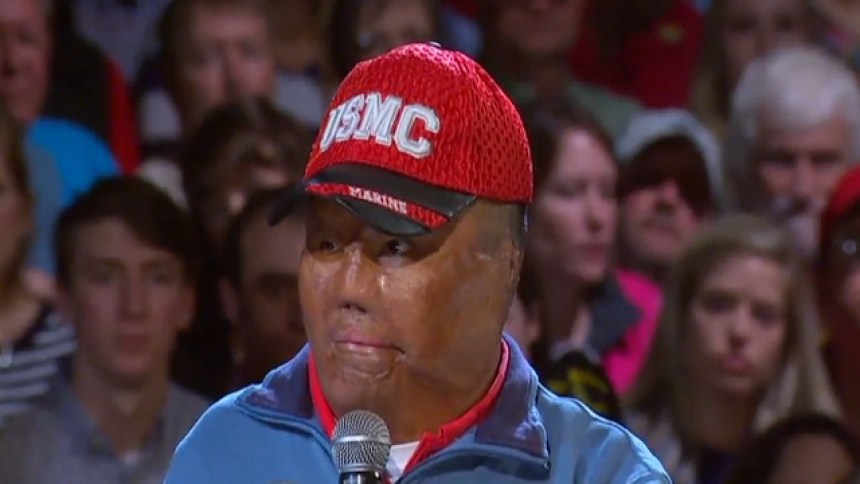 Two of Cpl. Porta’s fellow Marines were killed in an IED explosion. Porta then faced over 100 surgeries at Veterans Administration hospitals. Now he is a spokesman for Veterans for Trump.

All eyes were on Corporal Tony Porta as he told his harrowing story of running up against the VA hospital, and he asked the GOP hopeful what he planned to do about the many problems the VA is facing.

“I am really, really hurt about my two friends,” Porta said, looking Trump in the eye. “But I’m here for a reason. I’m here to fight, I’m here to help my fellow veterans.”

In a powerful moment on camera, the vet describes how he was injured, how he struggled to recover, and how he’s being treated by the VA today.

“I was really struggling. I was in San Antonio for six years, over a hundred surgeries, just to be this way,” Porta said. “I went back home–home wasn’t home anymore.”

Porta described some of the VAs he frequented as “awful,” while giving better marks to a smaller VA he went to later. The Marine vet described waiting for weeks for certain necessary treatments. He also expressed concern for veterans who commit suicide due to PTSD and other struggles.

God Bless our warriors. Thank you Trump for giving him a platform to share his story.