It is seen as an honor to serve one’s country and each and every American owes their thanks to those who serve. However, more and more, the Obama Administration has demonstrated their willingness to use the military as a petri dish for social experimentation and the recent policy allowing women in combat roles is no exception. Not-surprisingly, many Marines are upset by this new policy and the sensitivity training that they must endure as a result of it.[1] 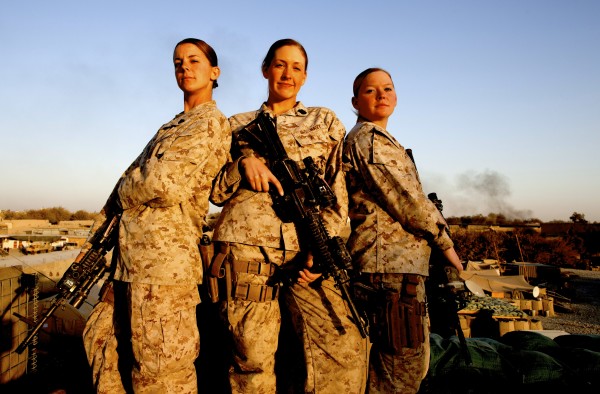 All Marines are now being forced to undergo training to erase “unconscious bias[3],” as women start to enter all combat roles for the first time.

The Marine Corps wants this training to already be underway before the first set of female recruits hits boot camp, in order to clamp down on potential misgivings and ill-will, Military.com reports.

Teams will spread around the Corps to provide two-day seminars to officers first, and then those officers will in turn instruct those of lower rank under their command to avoid prejudice based on race and especially gender. Seminars will also include a discussion on some practical examples of the obstacles that will present themselves and ways units can overcome them.

The reason for the training is mostly because male Marines have by and large been totally opposed to allowing women into combat roles. A survey conducted in 2012 by the Center for Naval Analyses found two-thirds of males Marines disapproved of integrating women, and a third of female Marines also opposed the idea. Although the Pentagon released a trove of documents in support of Defense Secretary Ash Carter’s decision to open up all combat roles to women, the unfavorable survey was curiously not included[4] in the document dump.

Instead, The Washington Post had to dig it up through a Freedom of Information Act Request.

Additionally, the Marine Corps was the only service to request an exemption to keep some combat roles male-only. Carter denied the exemption request, saying he wanted to keep standards consistent across all services. The request came following a Marine Corps study, in which male-only units vastly outperformed mixed gender units on combat-related tasks, though Navy Secretary Ray Mabus bashed the Marine leaders who ran the study, saying they biased the results. Moreover, Mabus argued that even regardless of the study results, average performance does not matter. Instead, what matters is whether individual female Marines can pass the standards set in place for combat specialties. Mabus and other high-level military officials have insisted repeatedly that standards will not lower to accommodate women.

But many rank and file Marines no longer trust Mabus, and neither does Marine Gen. John Kelly. At his final Pentagon briefing, Kelly said there will be incredible pressure to collapse standards because of “agenda-driven” officials bent on seeing more women enter combat positions[5].

Change comes from a slow evolution of mindsets. Forcing Marines to accept women into combat situations does not magically fix the problem of group cohesion. The simple fact is that Marines must trust one another and be able to put their lives in the hands of their comrades.

The fact of the matter is that aside from the separate living and restroom facilities, I can think of no greater divider of unity than to partner some Marines with others who have not been able to pass the same physical standards.

Social justice is a fine thing, but it will be of little comfort to the 200-pound Marine who may someday rely-on a 120-pound women do pick him up and carry him from a burning Humvee.

Conservatives opposed to this policy change oppose it not out of a sense of discrimination, but on the grounds that people will die as a result of this policy.

Let me repeat that: People will die in the name of social justice.