Trust in our federal government remains shockingly low and, according to a Fox News report[1], states and many American citizens are eyeing a fullscale military exercise as a rehearsal for possible martial law- a possibility that would have seemed far-fetched years ago, but under this administration, appears entirely possible. 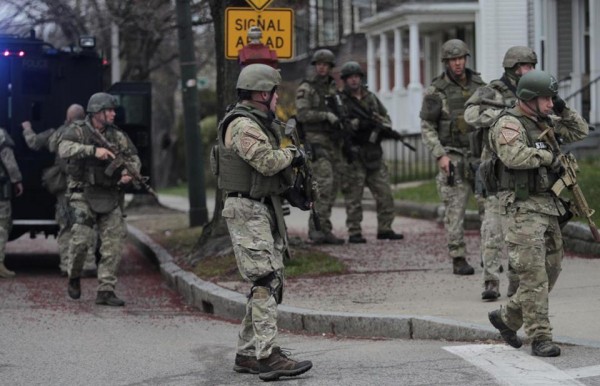 A massive military exercise planned in states across the American West has touched off a political firestorm, with several top Texas officials now questioning the military’s plans – if only to calm the Internet and constituent furor surrounding it.

The seven-state war simulation exercise, known as “Jade Helm 15,” is planned for this summer. It involves training exercises on private and public land – while such exercises are hardly unique, even the military acknowledges the “size and scope” of this one sets it apart.

While the White House and Pentagon are downplaying concerns, this hasn’t stopped a barrage of blogs and tweets warning about whether the federal government is preparing for “martial law.” Even actor Chuck Norris[3] is keeping his “eyes of a ranger” on the situation.

Western-state officials are now caught between a desire to calm their residents – and yet not appear to stoke any conspiracy theories.

This alone triggered accusations that the Republican governor is “pandering to idiots.”

On Monday, the governor defended his actions. “There was, frankly, an overreaction to the simple fact that someone has to be in charge with gathering and disseminating information,” said Abbott, speaking to reporters. “We stepped in to play that role, which is a role to be applauded.”

On Tuesday, Texas Republican Rep. Louie Gohmert also released a lengthy statement[4] saying his office has been “inundated” with calls on the matter.

“This military practice has some concerned that the U.S. Army is preparing for modern-day martial law,” he said. “Certainly, I can understand these concerns.”

At the same time, Gohmert said he understands why military officials want to test whether Special Forces groups can move around a civilian population and handle various threat scenarios.

Gohmert explained that his concerns stem from the way the military is approaching the exercise. He cited a widely circulated map[5] which details the seven states that are part of the exercise – California, Nevada, Utah, New Mexico, Arizona, Colorado and Texas. The map has Utah and Texas colored red and labels them “hostile.” It labels other states as “permissive,” leaning hostile” and “leaning friendly.”

Gohmert said he was “rather appalled” that the “hostile” areas “have a Republican majority, ‘cling to their guns and religion,’ and believe in the sanctity of the United States Constitution.”

And Texas Sen. Ted Cruz, a Republican presidential candidate, told Bloomberg[6]he’s reached out to the Pentagon to “inquire about this exercise.” He said he has no reason to doubt the Pentagon’s assurances, but he understands residents’ concerns – and backs Abbott’s actions.

But the White House and Pentagon are pushing back. Last week, White House Press Secretary Josh Earnest said he has “no idea what [Abbott is] thinking.”

“In no way will the constitutional rights or civil liberties of any American citizen be infringed upon while this exercise is being conducted,” Earnest said.

“This is a several weeks long training exercise with the purpose to refine the skills of our special operations forces,” he said, while batting back “strange Internet conspiracy theories” and “wild speculation” about the operation.

Special Operations Command said in a March press release[7] that the exercise, from July 15 through Sept. 15, will only take place on “pre-coordinated” public and private lands – with permission from landowners and officials. Much of it would be in “remote areas,” though residents may see an uptick in “vehicle and military air traffic and its associated noise.”

An official with Special Operations Command also told Fox 13 Salt Lake City[8] that the purpose was to replicate “potential terrain” soldiers might find themselves in overseas. As for labeling states like Utah “hostile,” the official said that was part of the design. “It is fictional and is not intended to represent any belief that the state of Utah is hostile,” the official said.

The politics have gotten tricky for western state lawmakers, however, as it puts them between concerned residents and America’s soldiers.

Meanwhile, Chuck Norris, a.k.a. “Walker, Texas Ranger,” is backing up the governor.

Writing on the conservative website WorldNetDaily, he said: “Concerned Texans and Americans are in no way calling into question our brave and courageous men and women in uniform. They are merely following orders. What’s under question are those who are pulling the strings at the top of Jade Helm 15 back in Washington. The U.S. government says, ‘It’s just a training exercise.’ But I’m not sure the term ‘just’ has any reference to reality when the government uses it.”

Does this mean that we will all soon find ourselves under military occupation? Probably not. However, our nation’s distrust in our federal government is well-founded as in six short years, we have witnessed a shocking disregard by our president for our nation’s laws, institutions and freedoms and such disregard can telegraph a possibility for an implementation of martial law.