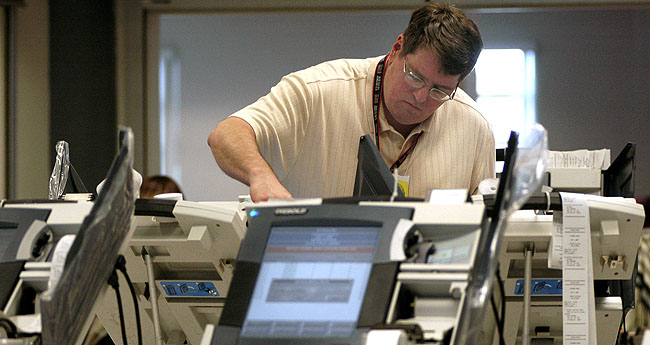 This is what we get at election time in Illinois. Do we really want these things to continue?… http://t.co/83LdEoKjCz[3]

It looks like it happened again.
Citizens in Maryland say voting machines are changing their Republican votes to Democrat.
CBS Local reported:

Early voting just started last week in Maryland, but there are already accusations that some voting machines are changing Republican votes to Democrat. Now Republicans are calling for an investigation by the State Board of Elections.

Meghan McCorkell has more on the machine controversy.

As Marylanders go to the polls, there are concerns that the vote you cast may not be for the candidate you want.

“We’ve heard from scores of citizens in our district and around the state who have had this problem where they hit one button to vote for one person, and when they go to the summary they see that the other person was checked,” said Del Nik Kipke, (R) Anne Arundel County.

Del. Kathy Szeliga says it happened to her.

Now GOP leaders are calling for an investigation.

Do you think that the mainstream media will push for a thorough investigation and will an investigation really happen? We’ll see the response over the next week but I will not hold my breath.