Be very careful[1] what you wish for, you just might get it. Someone should have told the Fight for 15! crowd about that, now karma is coming to call and it’s a b*tch. McDonald’s just hit an all-time high on the stock market last week. Why? Because they expect sales to increase because they are going to digital ordering kiosks. Yep, robots will replace humans just as predicted. This will take place in 2,500 restaurants across the nation. It will happen in 14,000 locations by the end of this year alone. I suggest those earning minimum wage spruce up their resumes. They are being replaced.

McDonald’s has made good on their threat to move to automation over this whole minimum wage stupidity. Now, instead of having a low-paying job, many of these people will have no job at all. And they begged for this to happen. Many people, including myself, have been warning that this was the logical outcome of demanding higher mandated wages for entry-level jobs that were never meant to be anything but that. They were meant for kids, not as a career for adults. 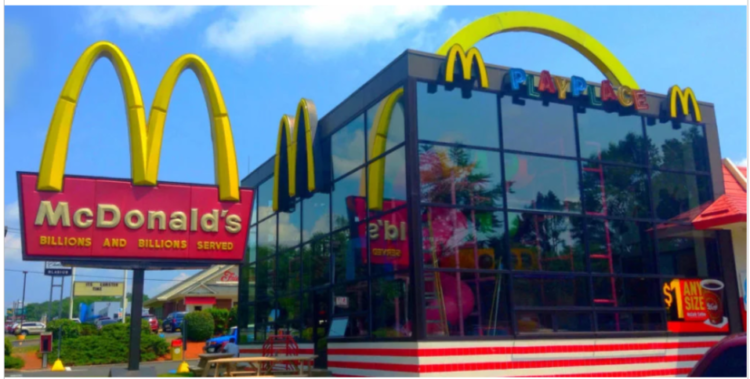 McDonald’s shares hit an all-time high on Tuesday as Wall Street expects sales to increase from new digital ordering kiosks that will replace cashiers in 2,500 restaurants.

Cowen raised its rating on McDonald’s shares to outperform from market perform because of the technology upgrades, which are slated for the fast-food chain’s restaurants this year.

Andrew Charles from Cowen cited plans for the restaurant chain to roll out mobile ordering across 14,000 U.S. locations by the end of 2017. The technology upgrades, part of what McDonald’s calls “Experience of the Future,” includes digital ordering kiosks that will be offered in 2,500 restaurants by the end of the year and table delivery.

This was going to happen one way or the other anyway, but the morons pushing #FightFor15 accelerated it. So did the states that were mandating outrageous minimum wage targets. McDonald’s has been using these kiosks in Europe and people love them there. There are no rude people to deal with, it’s fast and far more accurate. It was only a matter of time until they came to the US.

Frankly, I’m glad to see this development. It’s long overdue. You get to choose your preferred language at the kiosk and there is still a human manager just in case something goes wrong. The stock market loves the move… McDonald’s stocks are up 26 percent this year alone over this development. Welcome to the future and a massive shift in the labor force and jobs.

Meet Workers Who Took Overnight Buses to Bring the #Fightfor15[4] to McDonald’s Stockholders – Working In These Times: https://t.co/tJAPsaDBfC[5]