If you needed another reason not to eat the “food” at McDonald’s, we have it for you. Customers have reported finding “blue plastic” and “vinyl” as well as other stomach-churning items such as human tooth fragments in their chicken McNuggets. Just another reason to eat at home.[1] 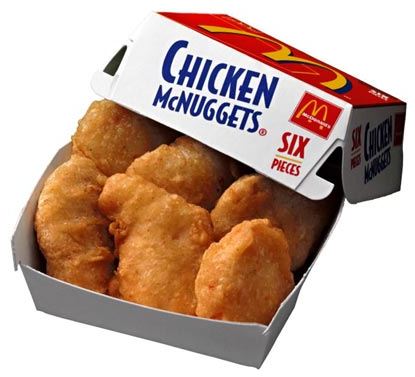 McDonald’s Japan is having a rough start to 2015. Last week, the company apologized after a customer found plastic fragments in an order of Chicken McNuggets, which were thought to have been produced at a Cargill factory in Thailand. McDonald’s pulled out nearly 1 million McNuggets[4] from the factory in one day. The same week, a customer in Misawa found a piece of vinyl[5] in an order of McNuggets.

In a statement about the plastic contamination, company spokesman Takashi Hasegasa said, “We deeply apologize for the trouble we have caused our customers and we are taking quick measures to analyze the cause of the contamination.”

Plastic and vinyl are, sadly, not the only gross items that customers have found in their McDonald’s meals over the past year. In August, the company received a complaint from a customer in Osaka who had found the shard of a human tooth in an order of french fries. It was unclear at press time if the customer was in fact “lovin’ it.[6]“

If you pile this on top of the numerous other complaints that have been issued against McDonald’s, it doesn’t paint a pretty picture. Licking the tread of your tire is a healthier alternative to scarfing down whatever chemically-addled mystery meat served at that chain. Moral of the story: when in doubt, don’t eat out.