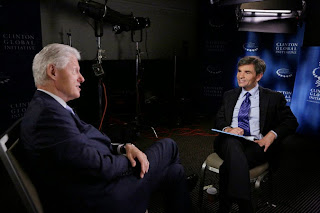 GeorgeStephanopoulos[1] has ALWAYS been a political operative for the Democrat Party masquerading as a new journalist. That’s why ABC hired him and that’s why the media in this country is corrupt. The Main Stream Media is filled with other George Stephanopoulos-types throughout the industry. He is by far not an isolated case.

NY Times[2] reports even after more than a decade as an analyst, anchor and public face for ABC News, George Stephanopoulos has never been able to shake the image that many Republicans have of him: Clinton hatchet man.

That image was glaring to the Republican strategists who blocked him from moderating a debate last year in the Senate race in Iowa.

It was the elephant in the room in 2011 when, after an interview that Mitt Romney’s advisers saw as especially argumentative, Mr. Stephanopoulos visited the campaign’s headquarters to try to reassure them that he was impartial.

And it has nagged at the chairman of the Republican National Committee, Reince Priebus, who has told people repeatedly that he does not want the anchorman anywhere near a debate stage in 2016.

On Thursday, the question of Mr. Stephanopoulos’s political leanings and his future as a leader of the network’s campaign coverage spilled out into the open as he acknowledged donating $75,000 to the Bill, Hillary and Chelsea Clinton Foundation over the past three years. He withdrew from playing any role in a planned Republican primary debate on ABC and called his donations an “uncharacteristic lapse.”