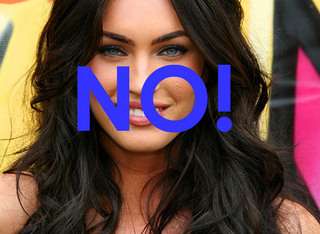 Well, I’m of two minds about it. The girl is horribly miscast, but at least she does know how to act, kinda. Did I say horribly miscast? I meant awfully, terribly, reprehensibly, stink-on-wheels miscast. I think they broke the mold before they made Michael Bay. The man knows how to blow things up, and he knows how to have lots of guys walk in slow motion toward the camera in a classic “power walk” just before they face certain doom. But he couldn’t assemble a female character to save his life. He doesn’t seem to keep in mind if he’s developing a nice-girl, a bored-housewife, a b*tch, a vamp, a hooker-with-a-heart-of-gold, an evil-stepmother, a dowager, a princess, a lady-of-the-lake, Juliet, Marion Ravenwood, Lieutenant Uhura, Scheherazade, et cetera, et cetera, et cetera. It’s like, to him, they’re all just one male stock character with a few different body parts.
So he gets hold of Megan Fox, who is a young trash-temptress with an Angelina Jolie obsession and tattoo fixation, who is sizzling hot and can kinda sorta act. And he puts her in this part that is a better fit for Elisabeth Shue, back in the Cocktail[5] days. It seems like a great fit at first. She’s dating the football jackass, she breaks up with him because he wants her to be his “bunny,” she knows more about cars than she lets on because her dad’s a jailbird carjacker, and by the second movie she’s working in daddy’s motorcycle shop as a girl grease monkey. At this point, there is only a partial disconnect…the tattoos fit right in, the overly-thick makeup job with the glossy pouty lips, does not. We can deal with that.

But then she’s the Girl Friday to Shia Labeouf as he repeats his run-the-gauntlet stunt from the first movie, trying to get a precious thing-a-ma-bob to a waiting whatz-a-ma-giggit, so we’re all left watching Shia and this super-duper-hot-girl — who’s fully clothed, by the way — run through this maze of marauding robots and explosions. And it just has an awkward feel to it, ya know. She does a lot of yelling, when everybody else does a lot of yelling. In Michael Bay movies, if you’re doing something and you want whatever it is to work…especially if it’s got to do with working a motorcycle, car, plane, boat, machine gun or rocket launcher — you yell really loud. A nice throaty yell is great for making things work in movies. I first learned that when Stalone went AAAAAARRRRRGGGGGHHHHH!!!!! while firing a machine gun at nothing in Rambo II. Yelling makes things work. Always. Unless it’s that car that won’t start when the machete-guy is walking…real…slow toward you in a slasher movie. Other than that, yelling works. Megan Fox yells very nicely. She has a man-yell.

Having said all that, yes I’m tired of her. She lacks man-appeal. Methinks her appeal is for boys, the boys who are fascinated with girls, but only since sometime last year. Untroubled by any unpleasant memories of an actual coupling, they lust after the ladies they’ll not actually be having, the same way a grown man lusts after a Bugatti Veyron or F1 McLaren. This full-grown man appreciates her supple body parts, but he finds her personality irritating, along with her overly-made-up face. He finds her suitable as a background extra with few or no speaking lines, perhaps a showgirl; nothing more center-stage than those. She lacks watch-ability. Think of re-doing the 1930’s classic production of Wizard of Oz[6], with Fox cast as Dorothy. Which means she’s carrying the entire show, since everyone except Dorothy occupies a secondary role. See what I mean now?

There is an urban legend going around that forty years ago, when they were creating a new character for The Avengers, one of the producers dashed off a memorandum addressing the desire for this person to have “M. Appeal,” with M standing for Man. And that’s how the character got her name. It seems, from all I’ve been able to gather, that there is some truth to this legend — but it really doesn’t matter, does it. Mrs. Peel did have man appeal, bushels of it, and because of that she remains memorable to this very day. Why? She appealed to men, and she was brilliantly cast, the part filled with a wonderful, talented actress who fit it and connected with it. Peel will never be forgotten, ever.

Now are there any Transformers fans who can remember the name of Fox’s character in the movie? And can spell it correctly?

Overexposed is right. It’s time for her to go bye-bye for a little while. It’s certainly not her fault, at least not completely. But the fatigue has set in.

And that goes for the live-action Wonder Woman movie too. The Champion of Themiscyra is tat-free; inking her skin would be disrespectful to her mother, and it probably wouldn’t work anyhow because she’s made out of clay. Keep looking. Think about Odette Yustman[7] and Julia Voth[8] instead.

Cross-posted at House of Eratosthenes[9].