“The smallest minority on earth is the individual. Those who deny individual rights cannot claim to be defenders of minorities.” — Ayn Rand[1]

When I see how politicians behave — especially last year, during the contentious elections — I see reason to believe the distinction between conservatives and liberals, is being irreversibly eroded. But then I read the news. The pattern that emerges is that there is a clear difference between conservatism and liberalism when I decide what it is that interests me about what’s going on, and the difference melts away when the politicians start making the decisions about what I’m supposed to look at.

Nadya Suleman, the octo-mom, is about to be homeless[2]. Her own mom hasn’t been making payments on the mortgage, since last spring. That’s probably due to a combination of factors including genetic irresponsibility, and the burden of providing for a sociopath daughter who just lies around the house thinking of more ways to get pregnant.

Nadya Suleman and the eight babies she gave birth to last month could soon be homeless, according to reports from the US.

The octuplets mum, who gave birth to the babies after receiving IVF treatments, could risk being out of a home after repayments on the house she is living in have fallen into default.

The bank filed a default notice on February 6 after Ms Suleman’s mother failed to pay the $2358 monthly repayment due since April 2008.

Now, it seems to me in a “civilized” society there would already be talks underway about when the younger Ms. Suleman is going to be sterilized. We were plenty civilized and technologically advanced to get her octupally-pregnant, weren’t we? But no. If talks are to be underway, they will be about how to keep the Sulemans in their beloved home and tell that mean old bank not to foreclose.
The arctic sea ice, we’ve lately discovered, hasn’t been shrinking like we thought. Faulty sensor[3]. Whoops.

The error, due to a problem called “sensor drift,” began in early January and caused a slowly growing underestimation of sea ice extent until mid-February. That’s when “puzzled readers” alerted the NSIDC about data showing ice-covered areas as stretches of open ocean, the Boulder, Colorado-based group said[4] on its Web site.

“Sensor drift, although infrequent, does occasionally occur and it is one of the things that we account for during quality- control measures prior to archiving the data,” the center said. “Although we believe that data prior to early January are reliable, we will conduct a full quality check.”

But of course that won’t stop our liberal democrats from “acting” to “save the planet.”[5] Together we can do this, you know.

Democratic leaders in both the Senate and House want to take action this year to stem global warming, but the imploding economy and balking Senate Republicans are likely to make that difficult.

Senate Majority Leader Harry Reid of Nevada said he plans to take up the contentious climate issue by the end of the summer.

“We have to take a whack at it,” Reid told The Associated Press. He said failure to act “would be neglectful.”

Right on, Harry. Take a whack at making a planet cooler. How I’d love to see a goal associated with that: Earth mean temperature down to 68.6 degrees Fahrenheit; carbon saturation 344 ppm. You know, and I know, I’ll see nothing of the kind. The objective will be stated as, simply, “to act.” What they mean by that, is act — to get in the face of businesses and hard-working people. Don’t tax you, don’t tax me, tax the man behind the tree.

The CEO of the Senate wants to take a look at it by the end of the summer. How convenient. Not much chance of inconvenient snowdrifts messing up your publicity tours in the last two weeks before labor day, huh Harry? Mark your calendar folks, there’ll be a lot of talk about “It’s hot lately, that’s irrefutable proof of GLOBAL WARMING.” The earth is gonna die if you don’t pay higher taxes.

But while you’re coming up with ideas, Harry, look to Massachusetts to lead the way[6].

Massachusetts governor Deval Patrick (D) will unveil his transportation plan today, which may feature what the governor himself calls a “Hummer tax.”

The measure, the Boston Globe explains, would feature “higher registration fees for gas-guzzling cars and offering discounts for those that do less harm to the environment. One industry opponent said it would be the first such fee in the nation on the state level.” Backers say “saying it would encourage people to buy smaller and more fuel-efficient cars, which are increasingly seen as key to curbing global warming.” Representative William Brownsberger, co-sponsor of a similar bill, told the Globe, “The social costs of larger vehicles include not only the additional pollution, but also higher crash risks to other vehicles.”

Guantanamo is just dandy[7]. Obama the Holy President ordered a review to see if it’s a terrible thing that defies international law, and it isn’t. The Chosen One will be working hard, now, to come up with some more excuses to close it down.

The Pentagon has concluded that the military detention center at Guantanamo Bay meets the standards for humane treatment of detainees established in the Geneva Convention accords.

In a report for President Obama on conditions at Guantanamo, the Pentagon recommended some changes — mainly providing some of the most troublesome inmates with more group recreation and opportunities for prayer — said an administration official who read the report and spoke on condition of anonymity, citing its confidential nature.

The lengthy report was done by a top Navy official, Adm. Patrick M. Walsh, in response to Obama’s Jan. 22 executive order to close the U.S. military detention facility in Cuba within a year. 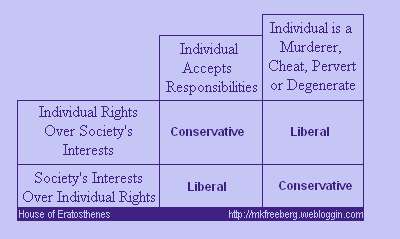 I could pile on to that list all day. But if you’re smart, you already see the common theme.

The common theme is that in each of these, the rights of the individual is set against the broader needs of society as a whole.

This is a good definition to throw in the file folder marked “how to tell conservatives and liberals apart”; you are not likely to ever have to yank it back out again, no matter what happens. When an individual has “rights” that liberals think are worthy of triumph over society’s needs, you can safely assume this is not an individual you want to be, or want to even personally know. He’s a kiddie-diddler, a whacked-out druggie, a convicted murderer facing the death penalty, a homeowner who hasn’t been paying the mortgage, or a terrorist being held at Guantanamo.

If the individual was acting civilized, they’d be leaving it to the conservatives to defend that individual’s rights. It isn’t that they’re opposed to responsible people retaining rights that actually mean something. The truth of it is far uglier: This is a struggle that they believe to be unworthy of their time.

Cross-posted at House of Eratosthenes[8].