Men Reveal What the ‘Perfect Woman’ Looks Like – Do You Agree?

A study has been conducted to find what the characteristics single American men find MOST attractive in a lady[1]– it has revealed that the preferences of the American man have changed a lot since last year, when it was blond-haired, blue-eyed beauties… 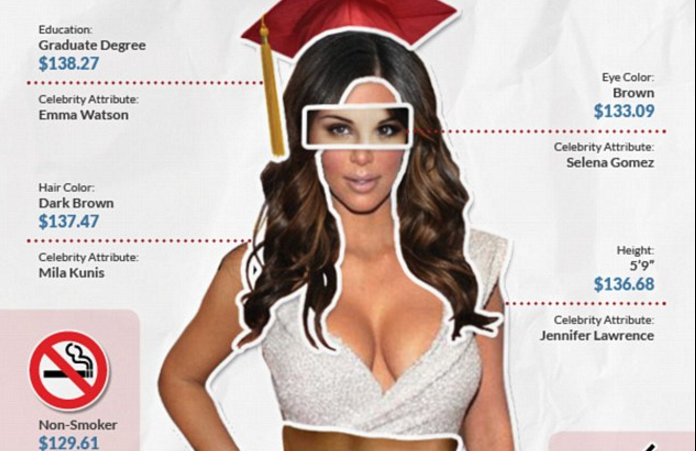 While in 2015 the most desirable attributes were golden locks and light eyes, attitudes have since swung in the opposite direction, with men on the site prizing brown eyes, brown hair, and darker skin above all else.

The dating site lets men bid for dates with beautiful women — and the study’s results were found by parsing out what they’re willing to pay more for.

By analyzing the most popular characteristics, they found that blondes don’t necessarily have more fun, if ‘more fun’ means being a more desirable date. In the past year, men have been preferring brown hair, like Mila Kunis’ or Kate Beckinsale’s.

They like brown eyes, too, favoring women with a stare like Selena Gomez, Jessica Alba, or Beyonce.

What’s not such a surprise is that there is also a trend toward tan or darker skin. Men on the dating site tend to favor women with darker complexions, typically of Middle Eastern descent — like Kim Kardashian.

‘When you think about the all American beauty, the picture of a blonde, blue-eyed bombshell usually comes to mind. Our study shows a major shift in America’s definition of The Perfect Woman,’ said Brandon Wade, CEO and Founder of WhatsYourPrice. ‘

American men valued dark features the most, and surprisingly enough, Middle Eastern was the most popular ethnicity among online daters!’

One thing that hasn’t changed so much? Men like supermodels — and they like their real-life dates supermodel-tall, if possible. The average desirable height was 5’9″, just like Jennifer Lawrence — which is four inches taller than the average American woman.

It’s also no surprise that men — particularly the kind willing to bid for a woman on a dating site — also want their women to be toned and athletic, like Jessica Biel.

But lest anyone thing the men studied are shallow, it’s not just looks they’re after. they want their smart, too, preferably holding a graduate degree.

[3]
Smart is sexy: They also want a brainy lady; though they tend to prefer women with graduate degrees, we doubt they’d turn their noses up at Emma Watson’s Bachelor’s from Brown University

Of course, those things aren’t necessarily what all men want, and the most-sought-after characteristics varied by city.

New Yorkers were found to be fans of women of Asian descent above others, while residents of Washington, D.C. want women who are slender, but not necessarily athletic.