Michelle Obama: My Body Is Too Sexy VIDEO

Apparently being the First Lady of the United States is not enough attention for one person. Mrs. Obama must speechify about the angst[1], the sorrow, the terrible persecution of being a girl and an attractive girl at that. The burdens one must carry when one is attractive are simply too much to bear, even for the likes of our supposedly strong and opinionated First Lady. Well cry us a river Michelle, but you’ll excuse us if we simply don’t buy your sob story. Read on to hear her ‘tragic’ story of being too good looking and too smart and all the emotional upset it brought. 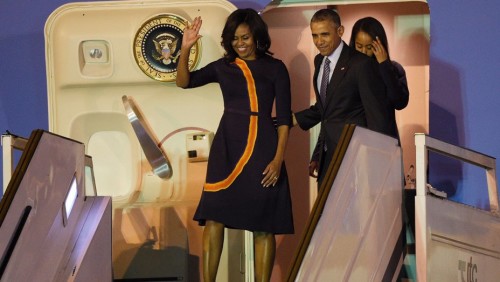 “I began encountering people outside of my home who had less faith in my ability to reach my goals. Teachers who didn’t think I was smart enough and would call on the boys instead of the girls, even though the girls had better grades. People who thought girls shouldn’t have ambition. And they would ask my brother what career he planned to have, but would ask me what kind of man I wanted to marry,” said Michelle.

“As I got older, I found that men would whistle at me or make comments about how I looked as I walked down the street as if my body were their property. As if I were an object to be commented on, instead of a full human being with thoughts and feelings of my own,” Michelle said.

“I began to realize that the hopes I had for myself were in conflict with the messages I was receiving from people around me. Messages that said as a girl my voice was somehow less important. That how my body looked was more important than how my mind worked,” she said.

Mrs. Obama, you had every opportunity that we all have had and then some. Most of us probably won’t be flying in Air Force One any time soon. So weep into your wine and cry into your caviar as we the people pay for your tens of millions of dollars worth of excessive vacations. We feel for you, we really do. It’s hard being successful. It’s hard being beautiful and having to wear expensive clothes on our dime. We get it. Now go ask the White House staff to make you some warm milk so you can cry yourself to sleep on your silk pillow. It’s tough being at the top.