Mike Pence: ‘Obama’s Era OF FAILED Policies That Weaken Our Nation Are OVER!’ [VIDEO]

Vice President-elect Mike Pence had the opportunity to address the Heritage Foundation and summed up the last 8 years of President Obama’s polices[1] with a strong and clear statement: “the Obama era of weakening our national defenses is over.”

Pence spoke at the Trump International Hotel in Washington, D.C. to outline some of the President-elect’s priorities and goals to accomplish in his first 100 days in office and those are: national security, economic prosperity and the Supreme Court, among others. Pence also extended a warm complement to the foundation for its “underpinning commitment to free enterprise” and “ensuring the ongoing vitality of the American Dream.”

Pence also believes that Trump’s victory margin warrants his Presidency a mandate: “We truly do believe that our President-elect has secured a mandate for leadership.”

Though the turn out numbers would suggest otherwise. 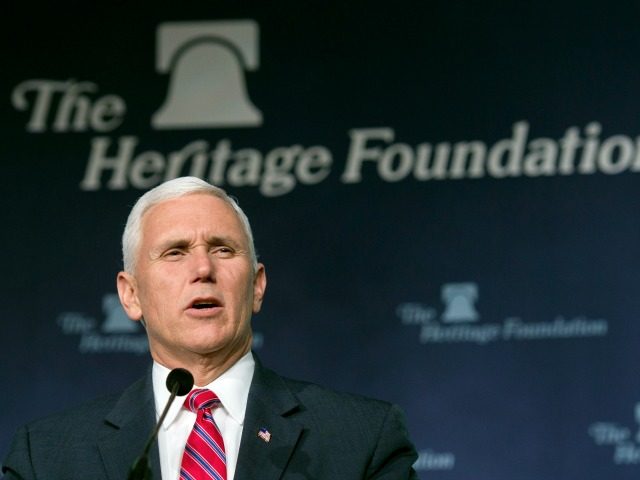 Pence continued on the topic of national security: “For America to be prosperous and strong, America must be safe. It was Ronald Reagan who taught us that peace comes through strength.”

When it came to the Obama Administration, Pence specifically claimed that even prior to 2008, America has “walked away from our commitment to being that arsenal of democracy in the world.” He noted that since 1991, America’s active duty armed forces has weakened from 2 million to 1.3 million members, the Navy has sank to 272 ships from 500, the Air Force is approximately one-third smaller since that historical period of time and our active duty army is the smallest it has been since World War II.

Pence ended his address with a powerful reminder, that America is the “greatest nation on earth” and that belief in God and the power of prayer is more important than ever.

“In these divided times, where we face unknowable challenges abroad and too much division at home, that if His people will call Him by His name, will humble themselves and pray, He’ll do like He’s always done throughout the long and storied history of this nation: He’ll hear from heaven and He’ll heal this land. This one nation, under God, indivisible with liberty and justice for all”