In lawless nations, mob justice[1] often prevails. A suspected rapist was murdered by an angry mob. No nation can survive, that ignores the rule of law. The suspect should have been arrested and tried in a court of law. But citizens took matters into their own hands. Vigilante justice is no justice at all, it is homicide. 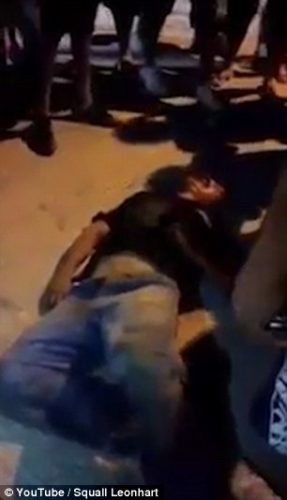 This horrifying video shows a mob of furious locals beating and kicking a man to death after he allegedly abducted and sexually abused a four-year-old girl.

Men, woman and even children surround the man, believed to be around 40, in a car park and film themselves relentlessly attacking their victim.

They then posted footage of their murder, in Nuevo Laredo, Mexico, to YouTube where commenters expressed concern at the locals going beyond the law to seek revenge.

If this man did what is claimed, he deserved punishment. But that punishment is meant to be handed down by the courts, not bloodthirsty people in the streets who may or may not have the entire story. This mob is as criminal as any rapist. It’s not their place to end a life based on what they THINK may have happened. Rule of law, not rule of bloodlust, must prevail. GRAPHIC video below.