Mom Heard A Knock at the Door. When She Realized What Was Happening, Tears Began Streaming Down Her Face

Can you imagine opening your door early one morning to find a national television crew standing in front of you? Wisconsin mother Karen Garrison was shocked to find Good Morning America on her porch Friday, honoring her as a mother. But the bigger surprise was yet to come[1]. 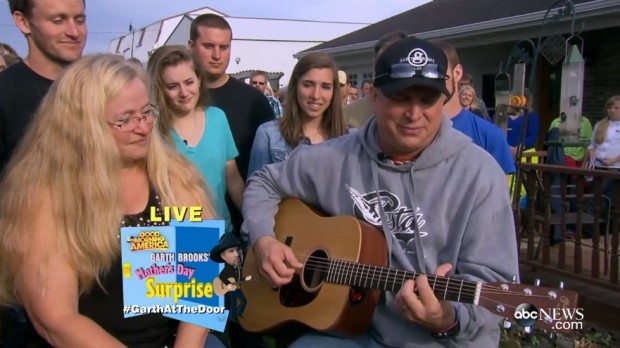 After sharing Garrison’s story, the “Good Morning America” crew had an extra surprise for her. Garrison — who named her son Garth and daughter Brook, after country star Garth Brooks — was escorted outside.

A crowd of familiar faces was awaiting her and began cheering.

Things only got better from there.

Moments later, country star Garth Brooks walked onto Garrison’s patio and gave her a hug. The music legend then snag the Wisconsin mother his hit song “Mom” on national television.

At the conclusion of the song, Brooks invited Garrison and her family to hop on his plane and attend a concert he was playing in Nebraska later that night.

Asked how she felt, a stunned Garrison replied, “I don’t know yet.”

Before the surprise, Brook delivered a heartfelt thank you to her mother.

“I love you and you’re my best friend, and I just want you to know how much we love you because I feel like you don’t believe us sometimes. You don’t believe what a great mom you are,” she said. “And so this was an ultimate thank you from us kids but also the people that you’ve also become a second mother to. You take care of everyone, and it’s a big thank you from us.”

The love and gratitude between Karen Garrison and her children was palpable even through video. It’s a moment every mother lives for, and likely the concert with Garth was the second best gift she was given this year – behind the display of love she was given by her children and community. Happy Mother’s Day, Karen!