Moments After Being Engulfed in Flames, Man Walks Into Taco Bell and Calmly Asks For Water

A man in Phoenix, Arizona was listed in critical condition with burns covering 90% the majority of his body after being engulfed in flames. After being extinguished, the man walked into the nearby Taco Bell and asked for some water.[1] 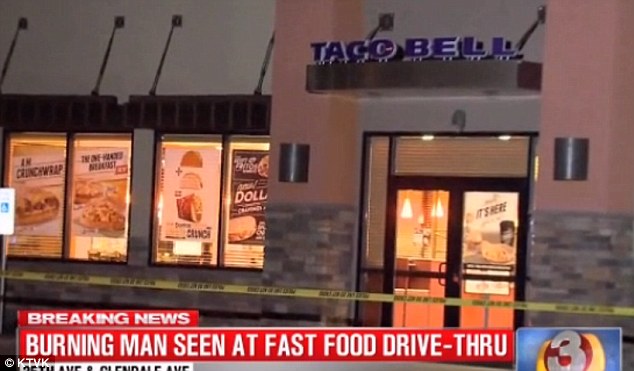 One of the bystanders who rushed to help a man found engulfed in flames outside some Phoenix businesses put out the blaze with a fire extinguisher and said the victim walked into a fast-food restaurant for some water afterward.

The unidentified man was hospitalized in critical condition Friday with burns over much of his body, and police were investigating how or why he was on fire Thursday evening.

Bystanders heard the man screaming, police Sgt. Trent Crump said. Some ran into a nearby Arby’s restaurant for help, and manager Lindsay Riedlinger grabbed a fire extinguisher and sprayed the man.

‘People standing around had obviously directed him to take off what was burning because a lot of his clothes were off,’ Riedlinger told KNXV-TV. ‘What was still on had patches of fire, so I sprayed him down to get the rest of it out for him.’

She said the man had a blank look his face and appeared to be in shock.

‘He was just standing there,’ Riedlinger told KTVK-TV. ‘He wasn’t yelling or anything.’

She said the man then got up and went into a nearby Taco Bell to get some water. She followed him into the restaurant and waited until police and paramedics arrived.

Crump said Friday that there was no evidence to suggest anybody had been with the man before the bystanders saw him on fire.

He has been tentatively identified but police will not release that information, the sergeant said.

This story is strange on its face, and generates more questions than it does answers. Did this man set himself on fire, and if he did, why? Why wasn’t he shouting as he was burning? This situation definitely necessitates further investigation.
Endnotes: