Morticians Were About to Burn a Body, Then They Heard a Noise… What Happened Next? OMG

This story is nothing less than a modern day miracle[1], although without a doubt I am sure, people will try to make sense of it using…logic.

A couple had unexpectedly given birth to their son two months early at Pan’an People’s Hospital in China. After the child, An An, spent 23 days in an incubator, his father, Mr. Lu, was excited to be able to finally bring his son home to his family.

Sadly, An An’s condition only deteriorated when he arrived home. Two days after leaving the hospital, Mr. Lu noticed that the boy was extremely pale and immediately rushed his son to the hospital. Unfortunately, doctors determined that the infant had suffered a cardiac arrest and was pronounced dead later that day.

After being issued a death certificate, the father transported his deceased son to the morgue at Pan’an Funeral Home. Approximately 15 hours later as the staff prepared for the infants cremation, they heard an unusual noise – a baby’s cry.

“As soon as I pulled him out of the morgue, I thought I heard noises. When I pushed him to the crematory, the noises became louder,” a funeral home staff member explained, according to Daily Mail. “I opened the container and saw him moving, so I told the father the baby was still alive.”

An An was immediately rushed back to the hospital, where he is currently under observation in an incubator and is in intensive care, according to Mirror. “I have been a pediatrician for over 20 years,” explained Doctor Chen, Head of Pediatrics. “I’ve never seen anything like this.” 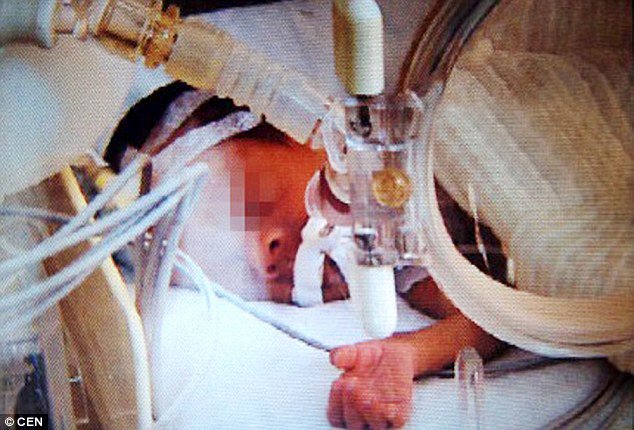 This emotional incident is only proof that doctors make mistakes and that miracles do happen – especially when you least expect them. If you feel like all is lost with something you are currently facing, just remember that with a little bit of faith the unexpected could happen – this baby boy’s short but remarkable life is enough proof of that.

Someone sure wants this sweet little baby to live…I do not doubt that he has something special to bring to the world.